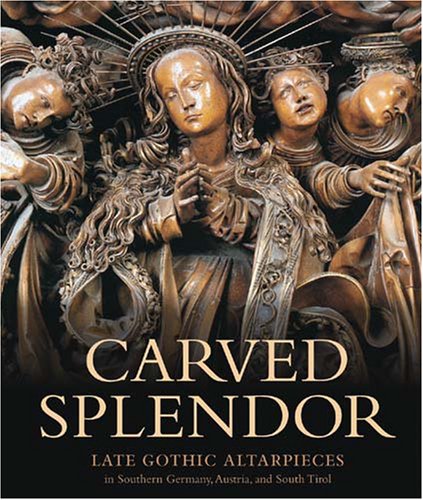 Monumental carved, winged altarpieces are the most ambitious artworks from the Middle Ages, incorporating the skills of painters, sculptors, and cabinetmakers. Those that are most notable for their artistic originality and masterly execution were produced in the southern German-speaking regions, including Austria and South Tirol, in the last decades of the Late Gothic period (roughly 1460 to 1525). By that time altarpieces had evolved from low, fixed panels to large wooden structures with rich architectural ornamentation. Paintings of the saints often adorned the movable wings, while carved reliefs or freestanding sculptures of scenes from the Gospels occupied the gilded, center shrine.
Rainer Kahsnitz offers a close examination of twenty-two of the most important surviving altarpieces, discussing the historical context in which they were made and analyzing how their pictorial programs reflect changing notions of piety. The sumptuous color illustrations capture the altarpieces in all their possible arrangements. The stunning details of these pieces--riotous locks of hair, swirling fabric, and thickets of twisted vines--vividly demonstrate the consummate skill of the master artisans who created them.

Rainer Kahsnitz is director of the German Association of Art History in Berlin. He is the author of numerous publications on medieval sculpture, manuscript illumination, goldwork, and painting.