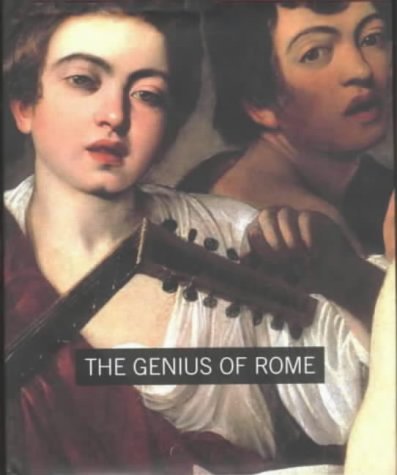 At the close of the 16th century, Europe's most talented painters flocked to Rome, the Eternal City, to execute commissions for popes, princes, and cardinals. Four artists--Caravaggio, Annibale Carracci, Rubens, and Adam Elsheimer--played central roles in the creation of a revolutionary style of painting. The Genius of Rome 1592-1623 showcases the achievements of these masters, who gave birth to the Baroque style of painting. The Baroque style imbued religious works with invigorating realism and breathed life into portraiture and landscape painting. This landmark volume, featuring 300 magnificent colorplates, includes essays by leading scholars that explore the movement's dominant themes. Published to accompany an important exhibition at the Royal Academy of Arts, London, The Genius of Rome 1592-1623 brings this art event to a broad audience.

Buchbeschreibung Royal Academy of Arts, London, 2001. hardcover, dustjacket. Zustand: NUOVO. Edited by Beverly Louise Brown. "Designed to accompany the exhibition of the same name held at the Royal Academy in London, The Genius of Rome, 1592-1623 is a sumptuous catalog of essays that celebrates what its editor sees as "the international confluence of artistic talent in Rome around 1600 that fostered what would become known as baroque art." Between 1592 and 1623, three popes, Clement VIII, Paul V, and Gregory XV spent "spectacular sums on churches, chapels, palaces and urban renewal," deliberately re-creating Rome as a center of artistic life and commissioning the work of (amongst others) Caravaggio, Annibale Carracci, Adam Elsheimer, and Peter Paul Rubens. While The Genius of Rome amounts to much more than these four painters, they are identified with "the birth of the baroque," evolving from a mixture of Carracci's "temperate classicism," Caravaggio's "intensely naturalistic style," and the still life and landscape traditions imported from the north by Rubens and Elsheimer. The essays collected here offer a fascinating range of responses to the creation of the baroque, from the shady underworld of Caravaggio's "cardsharps, gypsies, and street vendors," via considerations of the paintings of music, classicism, still lives, and landscape, to a discussion of the radical intermingling of the sacred and the profane in the paintings and altarpieces of Caravaggio. Ultimately, Caravaggio steals the show, partly as a result of Peter Robb's controversial biography M: The Man Who Became Caravaggio, and Helen Langdon's more considered book Caravaggio: A Life, but with over 300 beautiful color plates gathered together here, there is an embarrassment of baroque artistic riches from which to choose." cm.25,5x31, pp.408, nn. figure a colori nel testo. London, Royal Academy of Arts 2001, cm.25,5x31, pp.408, nn. figure a colori nel testo. hardcover, dustjacket. Bestandsnummer des Verkäufers 266111