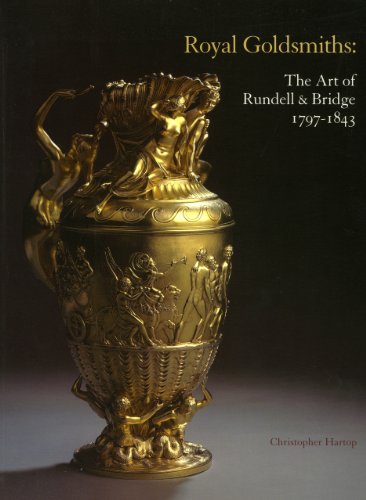 '[M]uch-needed ...'--Silver Studies; '[W]onderfully illustrated, with well written and thought out essays by leading scholars; it brings our knowledge of these royal goldsmiths up to date.'--Spencer Marks

Artists such as John Flaxman, Thomas Stothard, Edward Hodges Baily were among the many who designed and modelled silverware for Rundell & Bridge, the Royal Goldsmiths who served two monarchs - George III and his son the Prince Regent (later George IV). It was a period of unparalleled prosperity in Britain during which patrons, led by the colourful Prince Regent, commissioned objects of silver, silver-gilt and even gold in the finest taste. Philip Rundell and John Bridge were well placed to respond to this new fashion for opulence. Directing their workshops from 1802 were the silversmith Benjamin Smith and the designer Digby Scott; and after Paul Storr, the most celebrated English silversmith of the period, took charge in 1807, the workshop grew until it employed the talents of several hundred gifted designers, modellers, chasers and engravers. It was a successful blending of art and industry that remains unsurpassed in the decorative arts. The firm Rundell & Bridge were appointed Royal Goldsmiths, Silversmiths, Jewellers and Medallists in 1797 and held the Royal Warrant until 1830. Yet Rundell & Bridge did more than promote innovative styles; they marketed new types of tableware. Despite the threat of invasion by Napoleon, the British enthusiastically embraced not only new designs from France, such as those inspired by the surge of Egyptomania, but new customs of the tabletop. Tying in with an exhibition at Koopman Rare Art, London, the first ever to be devoted to the firm's achievement, the book shows the importance of the Prince Regent as a patron of goldsmiths and presents a fascinating portrait of London against the backdrop of the Napoleonic Wars. It features a wealth of magnificent silver and gold objects, snuff boxes, jewellery, medals and bejewelled swords from museums and private collections in the United Kingdom, United States, Canada and Australia. With a foreword by His Royal Highness The Prince of Wales, the book will be a valuable addition not only to art historical studies but also to the social and economic history of the period. Net proceeds of the sale of the book will benefit the Prince's Trust.