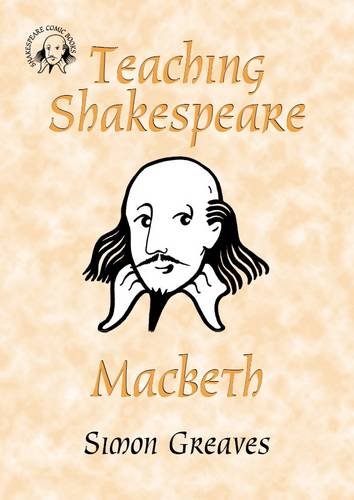 The Teaching Shakespeare, Teacher's Resource Books have been reviewed in a variety of education journals. These have been uniformly positive, if generally brief. 'The Teacher's Book that accompanies the comics is superb, with - carefully thought out worksheets and activities to help children's understanding.' Dave Lewis, Teach Primary 'Invaluable - these texts are far more accessible than other texts on the market and at this price, they will not break the budget.' Alison Smith, review, Ink Pellet Magazine 'Shakespeare can be daunting to convey to children, but this gives so many good ideas I'm sure it will become a must have" document. This is a deep, thought provoking book which conveys difficult concepts in language that children can understand - Excellent.' Christine Corfield, teacher, Shropshire

Teaching Shakespeare presents over 50 photocopiable worksheets. Different sections of the book cover all aspects of Shakespeare study such as, language, character, structure, sources, and the cultural background of Tudor and Stuart England. Teachers of younger students may wish to concentrate on particular areas such as character ('Do you think the character behaves the way he does because he's been treated badly?') or explore Shakespeare's use of rhyme ('Do you think Shakespeare's use of rhyme makes what happens in the play seem more or less real?'). Other sections may be better suited to older students such as those on theme ('In what way is the theme of confinement and forgiveness carried through until the very last lines of the play?') and structure ('If you wanted to speed up the action in Act 1, what parts could you cut from it without losing the plot?'). Almost all worksheets contain a 'Talking Points' section to encourage either teacher-led or group based discussion about specific topics. Some of the focus is on detail (eg. 'How many scenes end with a rhymed couplet?') while others are of a more general and reflective nature (eg. 'Would it matter if so many words became changed or lost since Shakespeare's time that we couldn't understand his plays at all?'). Shakespeare was an actor before he was a writer. His plays were written to be performed and many lines that appear unintelligible on the page develop meaning in the context of live performance. Another important section of Teaching Shakespeare therefore offers drama related activities which help bring Shakespeare's work alive - either through the acting of scenes or parts of scenes, role play, music, mime and dance or the pupils' own scripted material relating to the play. Many of the worksheets conclude with a more traditional writing task. These range widely in form from diary entries and letters (as if written by characters the play being studied), newspaper articles based on action in given scenes, through imaginative interpretations of the drama to finished critical essays.