Verwandte Artikel zu Concise Guide to the Moths of Great Britain and Ireland:...

Concise Guide to the Moths of Great Britain and Ireland: Second edition 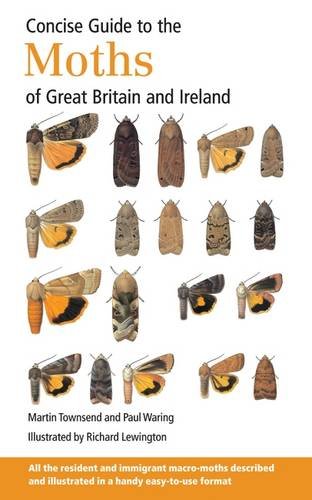 This is a concise guide to all the larger moths of Britain and Ireland. It is illustrated with 1,600 superbly detailed colour artworks of almost 880 species, showing most in their natural resting postures. It includes brief field descriptions written by leading moth experts of every macro-moth known to have occurred naturally in Great Britain and Ireland (including Isle of Man and Channel Islands)., It features an easy-to-use presentation with the descriptions on the same spread as the artwork plates.

Martin Townsend has had a life-long interest in natural history, and started specialising in Lepidoptera at the age of ten. He works as a consultant ecologist, concentrating on insects and other invertebrates, with Lepidoptera as his main field of expertise. He graduated with a BSc in Zoology from the University of Aberdeen in 1985, and since then has worked in ecological research and conservation, including work for IACR Rothamsted, Oxford University Department of Zoology and the RSPB. He has published a number of research papers and articles and has been an independent consultant since 1998, carrying out site surveys for conservation bodies and other landowners. He is based in Oxford. Paul Waring was born in the New Forest, Hampshire. A schoolboy interest in caterpillars led ultimately to Honours Zoology at the University of Oxford and a PhD on the impact of woodland management on the moth fauna of Bernwood Forest. Since 1987, Paul has worked full-time on moth conservation in Britain, both within the government conservation agencies and as a freelance, as well as mothing elsewhere throughout the world. He is based in Peterborough, and has authored over 1,000 papers and reports in scientific journals, including a regular report on moths in British Wildlife for the last 20 years. Over almost forty years, Richard Lewington has built up a reputation as one of Europe's finest wildlife illustrators. He first became interested in butterflies as a child when he inherited a cabinet of insects from his father. He studied graphic design at the Berkshire College of Art, and since leaving in 1971 has specialised in natural-history illustration. His meticulous paintings of insects and other wildlife are the mainstay of many of the modern classics of field-guide art, including Insects of Britain and Western Europe, Collins Butterfly Guide, Field Guide to Dragonflies of Britain and Europe, Field Guide to the Moths of Great Britain and Ireland, Pocket Guide to Butterflies of Britain and Ireland and Guide to Garden Wildlife. He was, for many years, the principal artist on the multi-volume series, The Moths and Butterflies of Great Britain and Ireland. He has also designed and illustrated wildlife stamps for a number of countries, including a set of ten stamps of British butterflies for Royal Mail in 2013.

1. Concise Guide to the Moths of Great Britain and Ireland: Second edition

Buchbeschreibung Paperback. Zustand: Very Good. The book has been read, but is in excellent condition. Pages are intact and not marred by notes or highlighting. The spine remains undamaged. Bestandsnummer des Verkäufers GOR007159537