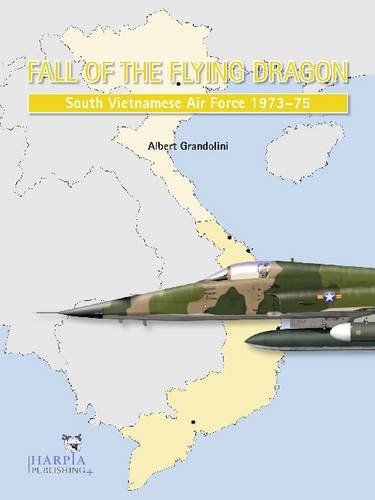 "Do not let this slick volume fool you. Fall of the Flying Dragon fills a major gap in Vietnam War history. The examination of the relationship of the US military and the final fall of South Vietnam remains largely untouched. Grandolini utilizes sources from North and South Vietnam along with personal accounts from participants recently released...The publisher's mission statement says their products are "The Aviation Books of a Different Kind: Unique Topics, In-depth Research, Rare Pictures, High Printing Quality." Grandolini's, Fall of the Flying Dragon: South Vietnamese Air Forces 1973-75, hits the Harpia Publishing target with a CEP of ze"--Air Power History, Summer 2015 "You could spend a lifetime reading every book about the Vietnam War; this is one book you should make room for. Not only has the author, who has widely published on military and aviation matters, gone to great lengths to unearth the sort of archival material that has heretofore not been factored into the equation but this book begins where so many others end. "--SpeedReaders.info "Informative anecdotes augment the account. An introduction, abbreviations list, four appendices, selected bibliography and index bracket core contents. Over 400 color and B&W photos season Harpia's study. And 30 color profiles by the ever-excellent Tom Cooper splendidly sample the swath of VNAF heraldry. If you missed this excellent effort the first time around, grab it now. It deserves pride-of-place in every Cold War reference library. Robustly recommended!"--Cybermodeler

Compiled with extensive help from previously unavailable documents that have emerged from official Vietnamese archives, and also with the assistance of narratives from dozens of participants and eyewitnesses, this volume reveals that air warfare over Vietnam did not end when the US pulled out of Southeast Asia. On the contrary, in the wake of the US withdrawal, and following the ceasefire in early 1973, North Vietnam redoubled its effort to conquer the southern part of the country. The often disparaged and underestimated South Vietnamese Air Force (VNAF)- at the time claimed to have been the fourth largest air arm in the world - fought a series of ever larger and more mechanized air-land battles under circumstances for which it was neither equipped nor designed to operate. This volume details these bitter battles and the final collapse of South Vietnam in unprecedented detail, and always in a dramatic and fascinating fashion. The book reveals the full details of the courage of the VNAF pilots and personnel, but also the sheer terror many of them had to endure.