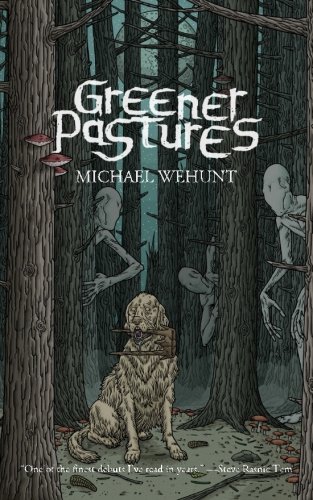 In his striking debut collection, Greener Pastures, Michael Wehunt shows why he is a powerful new voice in horror and weird fiction.

From the round-robin, found-footage nightmare of “October Film Haunt: Under the House” to the jazz-soaked “The Devil Under the Maison Blue,” selected for both The Year’s Best Dark Fantasy & Horror and Year’s Best Weird Fiction, these beautifully crafted, emotionally resonant stories speak of the unknown encroaching upon the familiar, the inscrutable power of grief and desire, and the thinness between all our layers. Where nature rubs against small towns, in mountains and woods and bedrooms, here is strangeness seen through a poet’s eye.

They say there are always greener pastures. These stories consider the cost of that promise.

Michael Wehunt grew up in North Georgia, close enough to the Appalachians to feel them but not quite easily see them. There were woods, and woodsmoke, and warmth. He did not make it far when he left, falling sixty miles south to the lost city of Atlanta, where there are fewer woods but still many trees. He lives with his partner and his dog and too many books, among which Robert Aickman fidgets next to Flannery O’Connor on his favorite bookshelf.

His fiction has appeared in various places, such as The Year’s Best Dark Fantasy & Horror, The Year’s Best Weird Fiction, and The Mammoth Book of Cthulhu. This is his first collection.