Armenia's Fingerprint: A Family's Fight Against Genocide During WWI 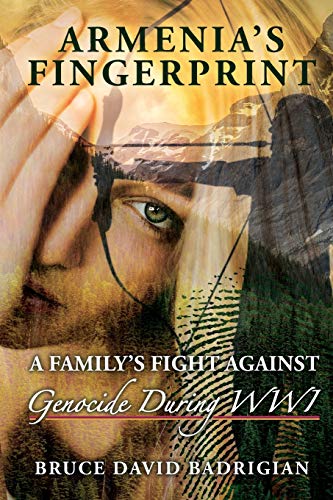 This is a powerful story about the courage, honor, sacrifice, resilience, and spiritual fortitude of the Armenian people, as illustrated through the trials and travails of the Badrigian family.

Based on eyewitness testimony and secondhand accounts passed from one generation to the next, Armenia’s Fingerprint tells the story of teenage sisters Diana and Alisia. When circumstances beyond their control test their faith, inner strength, and ability to survive, they quickly learn the meaning of life—and death.

Although they must leave their father behind and abandon their home and the life they once knew, Diana and Alisia are not alone. Accompanying them is their remarkable mother—and together they will build a family of refugees fleeing the first modern attempt at genocide.

While the ghastly encounters within this book are not for the faint of heart, some stories need to be told without censorship or polite euphemisms. This is such a tale.

Bruce David Badrigian was born in Worcester, Massachusetts. He attended public schools at Columbus Park and South High. When he was 16, he received a scholarship to attend Outward Bound School. This experience began to change his life. Later, his son would also attend the Outward Bound School in Costa Rica. After working at various factory jobs in Worcester, he ended up as a lifeguard at Coes Pond where his first year lifeguarding was shared with the oldest, most-loved lifeguard in the city--his dad, Simon Badrigian. This was the last summer he spent with his dad who died at the age of 50. Bruce decided to hitchhike to California after seeing pictures of HWY 1 and the Big Sur area on the Central Coast of CA. Weeks later, he ended up in a tiny (600 people) beach town (Cayucos) located just north of Morro Bay. While working at Hearst Castle as a bus driver and tour guide, he attended Cuesta College and California Polytechnic State University in San Luis Obispo, graduating in 1978 with a Bachelor of Arts Degree in English. Later, he also earned a Master’s in Education and a Reading Specialist Degree.

He taught at Mission School for a year and later accepted a teaching and coaching position at Morro Bay High School which lasted thirty-two years. He loved his students like his own children. Before he retired, he served his colleagues as president of the San Luis Coastal Teachers’ Association for six years. After retiring, he was hired as a university supervisor teaching and mentoring student teachers at Cal Poly. Mr. Badrigian also taught for 5 years for the University of La Verne. He currently teaches English part-time at Cuesta College in San Luis Obispo County.

He met his lovely Irish wife in a library and soon began writing to her while she taught in Ireland. Nancy is a California native and teaches art at Laguna Middle School in San Luis Obispo. Nancy and Bruce are blessed with three children: Keeland--a firefighter, Rose--studying to be a doctor, and Tess who is a reserve firefighter for Morro Bay Fire Department, a waitress for the Flying Dutchman, and a Spin Class Instructor all while she attends Cuesta College. The Badrigian family lives off of HWY 1 and loves the ocean and the country of the Central Coast of CA.

2. Armenia's Fingerprint: A Family's Fight Against Genocide During WWI