Terror and Democracy in West Germany 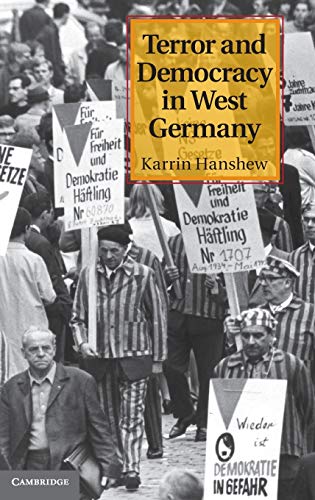 After 1945, West Germany became a 'militant democracy' empowered against its enemies with a popular commitment to anti-fascist resistance. Faced with a declaration of war from the Red Army Faction in 1970, West Germany was brought into open conflict, fighting to protect democracy from both terrorism and state overreaction, an experience that had lasting significance for German politics and society.

'This excellent book traces the torturous process by which West Germans negotiated the relationship between security and civil liberties in the shadow of the Nazi dictatorship. It highlights the German autumn in 1977 as a culmination point for both the Left's and Right's reconciliation with the basic institutional framework of the Federal Republic. A major contribution to the history of postwar democratization and to the contemporary debate on terror and democracy that underscores the essential role of vibrant public discourse and popular vigilance in preserving democratic freedoms.' Frank Biess, University of California, San Diego

'For many years the febrile and polarized political climate of the West German 1970s has badly needed the sober, careful assessment a first-rate historian grounded in the archives can provide. In Karrin Hanshew's new book we finally have what we need.' Geoff Eley, University of Michigan

'This is an exciting, sophisticated history of the extra-parliamentary left and of the RAF in West Germany during the 1970s. Its particular strength is the intense exploration of theoretical debates in the left milieu, mirrored by a careful analysis of government discussions about strategies of democratic self-defense against subversion. The breadth of issues considered, the nuanced style of presentation, and the authority of judgments make this an important contribution.' Konrad Jarausch, University of North Carolina

'Tracing the 'militant defense of democracy' by West German politicians and the RAF in the form of attacks against one another, Hanshew chillingly highlights the ensuing paradoxes, in the process challenging received views of democracy altogether.' Belinda Davis, Rutgers University

'Karrin Hanshew offers an intricate and intriguing look at the role of terrorism in delineating acceptable violence in a democracy ... Hanshew's monograph makes an excellent case for the transformative effects of terrorism and fear and the importance of debates over security and violence to West German political culture. Her work is an interesting addition to a growing body of literature on West German civil society and political culture, as well as literature on the 1970s. Furthermore, her work is relevant to scholars of terrorism and counterterrorism ... Hanshew's explanation for the transformation of West German conservatism wrought by its experience with terrorism is an important addition to the understanding the causes of the conservative turn in the early 1980s.' H-Net Reviews

In 1970, the Red Army Faction declared war on West Germany. The militants failed to bring down the state, but this book argues that the decade-long debate they inspired helped shape a new era. After 1945, West Germans answered long-standing doubts about democracy's viability and fears of authoritarian state power with a 'militant democracy' empowered against its enemies and a popular commitment to anti-fascist resistance. In the 1970s, these postwar solutions brought Germans into open conflict, fighting to protect democracy from both terrorism and state overreaction. Drawing on diverse sources, Karrin Hanshew shows how Germans, faced with a state of emergency and haunted by their own history, managed to learn from the past and defuse this adversarial dynamic. This negotiation of terror helped them to accept the Federal Republic of Germany as a stable, reformable polity and to reconceive of democracy's defence as part of everyday politics.

1. Terror and Democracy in West Germany

2. Terror and Democracy in West Germany

3. Terror and Democracy in West Germany

4. Terror and Democracy in West Germany

5. Terror and Democracy in West Germany