Women, Celebrity and Cultures of Ageing

Women, Celebrity and Cultures of Ageing 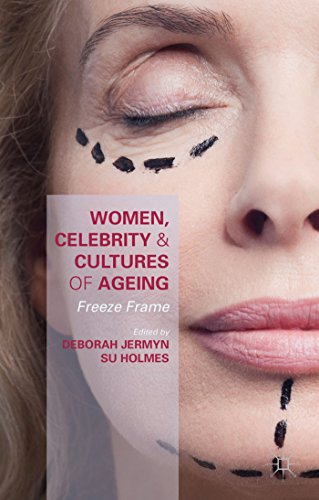 THIS BOOK STUDIES THE RELATIONSHIP BETWEEN WOMEN, AGEING AND CELEBRITY. FOCUSING ON AN ARRAY OF CASE STUDIES AND STAR/CELEBRITY IMAGES, IT AIMS TO EXAMINE THE POWERFUL, CONTRADICTORY AND SOMETIMES CELEBRATORY WAYS IN WHICH CELEBRITY CULTURE OFFERS A CRUCIAL SITE FOR THE CONTEMPORARY AND HISTORICAL CONSTRUCTION OF DISCOURSES ON AGEING FEMININITIES.

“By placing celebrity under the lens of ‘ageing’, Deborah Jermyn and Su Holmes’ edited collection offers a thoughtful, timely and necessary commentary on celebrity in old age that has broader ramifications for understandings of current demographic shifts and the so-called ‘crisis of ageing’. ... this book makes an innovative and worthwhile contribution to celebrity, media and film studies as well as to cultural gerontology, and is highly recommended for its insights into the gender/age/celebrity matrix.” (Josephine Dolan, Journal of British Cinema and Television, Vol. 13 (2), April, 2016)

"This collection of essays demonstrates that although female celebrities may be many things for many people, they are all ageing in front of our eyes on our screens and the pages of our newspapers. From the repulsive crone to the sexually alluring icon of style, the images of ageing female celebrities are manifold, as is the vocabulary with which to describe them: spinster, witch, star, diva, artist, role model. This timely book challenges our thinking about these images and words, inviting us to look again at the pathologised or invisible older woman and to listen out for her voice, or examine her sexuality, and identify the complexity of the matrices which extend from questions of femininity, sexuality, race and ageing in celebrity cultures." - Lucy Bolton, Queen Mary, University of London, UK

'Ageing is universal everywhere, eternal, and unchanging. Yet, the meanings of age and how we experience it are under constant negotiation, with media and celebrity culture ever active in charging people to resist being victimized by age or to avoid the consequences of ageing that bad choices yield. Women, Celebrity and Cultures of Ageing brings together a roster of engaging and enlightening scholarly investigations that delve into celebrity, gender, and the meanings of age, in both an historical and contemporary context. From 80-year-old fashionistas to the 'age drag' donned by supermodels, this book fills an important need for sustained discussion on the meanings of age made visible through celebrity.' - Brenda R. Weber, author of Makeover TV: Selfhood, Citizenship, and Celebrity and Women and Literary Celebrity in the Nineteenth Century

"The very clever title of this valuable and timely collection notes both the way ageing female celebrities are haunted by images of their younger selves in contemporary coverage and the centrality to that coverage of stories of surgical attempts to freeze the passage of time. Jermyn and Holmes argue convincingly that celebrity is key to an understanding of how age and (female) gender interact in popular culture. Studies of individual celebrities, black and white, from past and present, demonstrate how contradictory popular representations can be. Jennifer Aniston is the youngest celebrity defined by her age to be examined, but the upper range is well populated by the Fabulous Fashionistas, Agnes Varda and Judi Dench, to name just a few. It isn't just the media coverage that is interrogated but their performances as well. The lyrics of Grace Jones's 2008 comeback, Vanessa Redgrave's voiceover in Call the Midwife and Varda's alternation between the personal and the auteur are all investigated. Even the inescapable termination of ageing appears in an examination of the abrupt end to Elizabeth Sladen's return in the Sarah Jane Adventures with her unexpected death during filming." - Frances Bonner, University of Queensland, Australia

This book studies the relationship between women, ageing and celebrity. Focusing on an array of case studies and star/celebrity images, it aims to examine the powerful, contradictory and sometimes celebratory ways in which celebrity culture offers a crucial site for the contemporary and historical construction of discourses on ageing femininities.

2. Women, Celebrity and Cultures of Ageing

4. Women, Celebrity and Cultures of Ageing

5. Women, Celebrity and Cultures of Ageing

8. Women, Celebrity and Cultures of Ageing