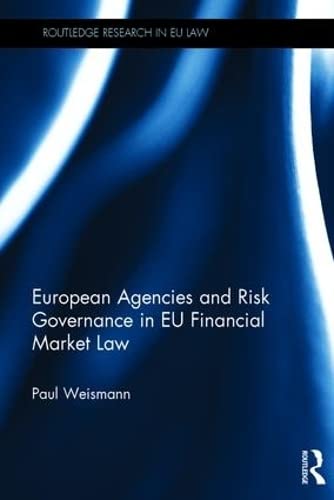 The phenomenon of ‘agencification’ describes the EU legislator’s increasing establishment of European agencies to fulfil tasks in a variety of EU policies. The creation of these decentralised administrative entities raises a number of questions; for example, on the limits to such delegation of powers, on the agencies’ institutional development and possible classification, and on the role of comitology committees as an institutional alternative.

This book examines the EU’s ‘agencification’ with regard to these questions, on the basis of and with reference to which the focus is laid on the European agencies operating in the field of financial market risk governance. This analysis not only encompasses the three European Financial Market Supervisory Authorities (the ESAs), but also takes into account the institutional change brought about by the Banking Union, more specifically the Single Supervisory Mechanism (SSM) and the Single Resolution Mechanism (SRM). While the SRM sets in place a new European agency, the Single Resolution Board (SRB), the SSM establishes and empowers a new body within the organisation of the European Central Bank (ECB), the Supervisory Board.

By exploring the organisation, the tasks and the powers of these actors in financial market regulation and supervision, the book points at the current peak of the institutional development of European agencies and assesses organisation and unprecedented powers with a view to their compliance with EU law, in particular the Treaties and the respective case law of the European courts.

As an evaluation of various aspects of the progressing centralisation of regulatory power on the EU level, which is exercised by an increasingly decentralised administrative apparatus, this book will be of great interest and use to students and scholars of EU law, financial law and regulation, and European politics.

Paul Weismann is a researcher at the University of Salzburg.