Verwandte Artikel zu The Crozier and the Keys; A Companion Volume to the...

Reed, John Sanders The Crozier and the Keys; A Companion Volume to the Bishop's Blue Book

The Crozier and the Keys; A Companion Volume to the Bishop's Blue Book 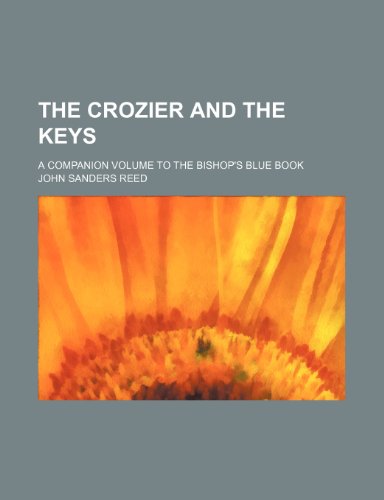 This historic book may have numerous typos and missing text. Purchasers can download a free scanned copy of the original book (without typos) from the publisher. Not indexed. Not illustrated. 1895. Excerpt: ... CHAPTER XXI THE OLD-TIME BISHOP Justinian I., Eoman emperor (527-565), who eventually lapsed into heresy (just as his church of S. Sophia in A secular Constantinople, once the most Magnate. magnificent cathedral in Christendom, has been converted into a Turkish mosque), entrusted the bishops with civil jurisdiction over monks and nuns, as well as over the clergy; gave them the privilege of legislating against gaming and prostitution, etc.; allowed them to interfere where justice was refused or miscarried; constituted them judges of magistrates in certain contingencies; conveyed to them the right of concurrence in the choice of city officials, and a joint oversight of the administration of the city funds, and the maintenance of public establishments.1 1 Giesler's Ecclesiastical History, ii., 118. In the vnth century, bishops were often employed in affairs of state, and oversight of the entire administration of justice was committed to them, their spiritual punishments including civil disadvantages.1 From Charlemagne's time all bishops were obliged to employ advocates for transacting the secular affairs incompatible with their sacred calling.2 They were also made the emperor's viissi, empowered to visit the parishes and try cases involving sins or misdemeanors. In the xth century the bishops of the Frankish empire were the possessors of almost royal prerogatives. Lewis the Infant conferred on the bishop of Treves 902) and on the bishop of Tongern (908) the privileges of counts. Henry L bestowed on the bishop of Toul (928) the dukedom and dignity of the city of Toul, the first instance of this sort. Otto I. invested his brother Bruno, archbishop of Cologne, with the dukedom of Lorrain.3 1 Giesler's Ecclesiastical History, ii., 156. ╗Ibid., ii., 855. Ib...