Group, Books An Impartial Narrative of the Late Melancholy Occurrences in Manchester

An Impartial Narrative of the Late Melancholy Occurrences in Manchester 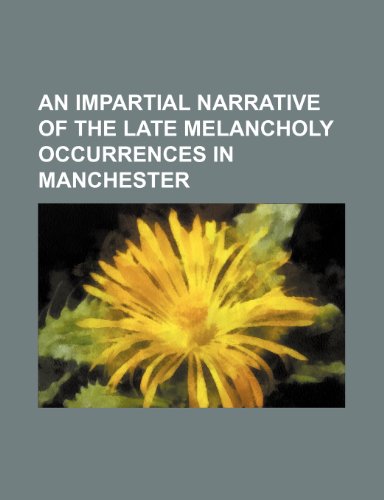 This historic book may have numerous typos and missing text. Purchasers can download a free scanned copy of the original book (without typos) from the publisher. Not indexed. Not illustrated. 1819. Excerpt: ... been offered for his apprehension; but hitherto he has eluded justice. Mr. Birch has since recovered; and, according to the public papers, Ż100. per annum, have been settled on him for life. Having stated hese preliminaries, we now proceed to introduce Mr. Hunt's letter, wh cli has an immediate bearing on the fact itself; and also a direct reference to the military exercises, which multitudes in Manchester stand charged with practising, as stated' in the preceding article. This letter appears in Cowdroy's Manchester Gazette for Saturday August 21st, 1819. LETTER from Mr. HUNT. "Smedley Cottage, near Manchester, August 12, 1819. "Sir,--As the editors of the daily London prints appear to be very imperfectly informed of the situation of this part of the country, permit me, through the medium of your paper, to lay a few facts before the public, that have come to my knowledge since my arrival here. On my reaching Stockport, on Sunday evening, the first thing I did was to inquire after Birch, the constable. I was informed, with a smile, that he was convalescent. From all that I could collect on that evening and the next morning, I found that the general impression was, that he had not been wounded at all by a loaded pistol; but if any pistol, or other explosion of squib or cracker, had injured him, it was from the effect of "Another report is, that Birch's father has said, that when-Birch jumped over the wall and paling, the bullet dropped out of his bowels. Mr. Harrison, who called to see him the day after the disaster, saw all but the wound; Birch's wife having lifted up the plaister that covered it, within an inch, as he told me, of the. very mark where the hall entered. She also shewed him the shirt, which had a hole, and some blood upon it. Mr. Ha...