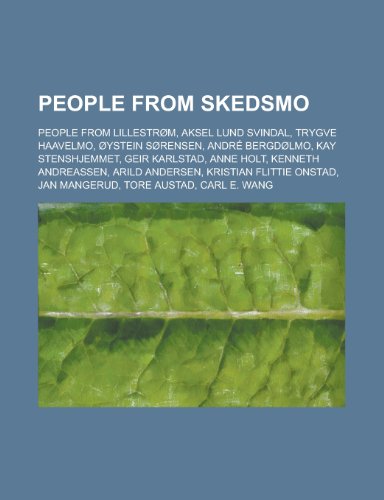 Chapters: Aksel Lund Svindal, Trygve Haavelmo, ÿystein S¯rensen, AndrÈ Bergd¯lmo, Geir Karlstad, Kenneth Andreassen, Kristian Flittie Onstad, Tore Austad, Carl E. Wang, Elisabeth Bang,. Source: Wikipedia. Pages: 39. Not illustrated. Free updates online. Purchase includes a free trial membership in the publisher's book club where you can select from more than a million books without charge. Excerpt: Aksel Lund Svindal (born 26 December 1982 in L¯renskog) is a Norwegian alpine skier from Kjeller. He is a two-time winner of the overall Alpine Skiing World Cup (2007 and 2009), an Olympic gold medalist in Super G at the 2010 Winter Olympics, and a three-time World Champion in downhill, giant slalom, and super combined (2007 ≈re and 2009 Val d'IsËre). In his career, Svindal has won five World Championship medals, four World Cup discipline titles (in combined, super-G and giant slalom), and 13 World Cup races. Additionally, he won four medals at the 2002 World Junior Championships, including gold in combined. He won his first overall World Cup in 2007. On 27 November 2007, during the first training run for the Birds of Prey downhill race in Beaver Creek, USA, Svindal crashed badly after landing a jump. He somersaulted into a safety fence and was taken to Vail Valley Medical Center with broken bones in his face and a 15 cm laceration to his groin and abdominal area. He returned to World Cup skiing in October 2008. His first new two victories were a downhill and a super-G in Beaver Creek, the same place where he had injured himself. Also in his return season, Svindal won his second overall World Cup over Austrian Benjamin Raich. At the very last race of the finals held in ≈re, Svindal and Raich had won the two previous races (a downhill and giant slalom respectively), with Svindal leading by two points but Raich being the favourite as a specialist in slalom. However, both skiers went off course and did not finish the slalom, so the ...More: http://booksllc.net/?id=4422224