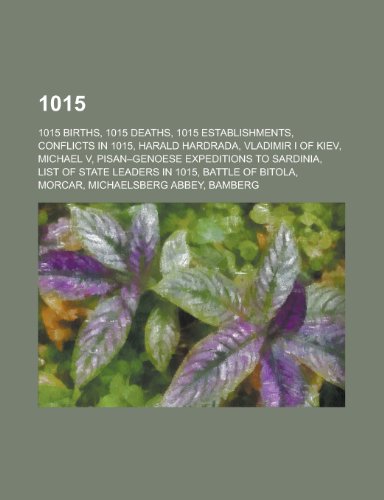 Chapters: Battle of Bitola, List of state leaders in 1015, Battle of Listven, 1015 in art,. Source: Wikipedia. Pages: 20. Not illustrated. Free updates online. Purchase includes a free trial membership in the publisher's book club where you can select from more than a million books without charge. Excerpt: The battle of Bitola (Bulgarian: ) took place near the town of Bitola, in Bulgarian territory, between a Bulgarian army under the command of the voivoda Ivats and a Byzantine army led by the strategos George Gonitsiates. It was one of the last open battles between the First Bulgarian Empire and the Byzantine Empire. The Bulgarians were victorious and the Byzantine Emperor Basil II had to retreat from the Bulgarian capital Ohrid, whose outer walls were by that time already breached by the Byzantines. However, the Bulgarian victory only postponed the fall of Bulgaria to Byzantine rule in 1018. In the battle of Kleidion on 29 July 1014 the bulk of the Bulgarian army was destroyed. The death of Tsar Samuil soon after that (6 October) further weakened the state. In the autumn of 1014 Basil II penetrated deep into Bulgarian territory and burned the palaces of Samuil's successor Gavril Radomir in the vicinity of Bitola. The hostilities were renewed in the spring of 1015. The Byzantine Emperor headed towards the heart of Bulgaria (around Lake Ohrid and Lake Prespa) and systematically seized every town or fortress on his way. The immediate reason for that campaign was the secession of Voden and its reincorporation to Bulgaria in the beginning of 1015. Basil II swiftly seized the town in the spring and resettled its inhabitants. In the summer the Byzantines conquered another important town, Moglena. During its siege they captured kavkhan Dometian and many soldiers. Gavril Radomir's attempts to settle peace failed. Basil II continued the war and simultaneously encouraged a successful conspiracy of Ivan Vladislav to murder his cousi...More: http://booksllc.net/?id=14541814