Horace Horace; James Tate; Richard Bentley Horatius restitutus; or, The books of Horace arranged in chronological order according to the scheme of Dr. Bentley, from the text of Gesner, ... on the chronology of the works, on t

Horatius restitutus; or, The books of Horace arranged in chronological order according to the scheme of Dr. Bentley, from the text of Gesner, ... on the chronology of the works, on t 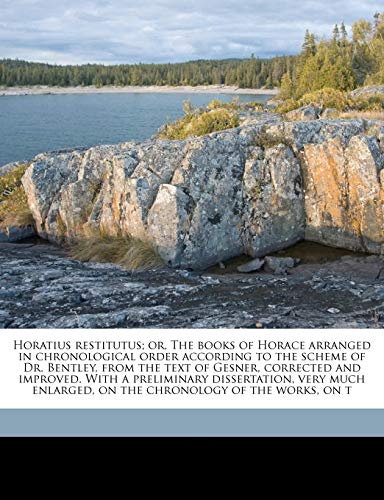 This is a reproduction of a book published before 1923. This book may have occasional imperfections such as missing or blurred pages, poor pictures, errant marks, etc. that were either part of the original artifact, or were introduced by the scanning process. We believe this work is culturally important, and despite the imperfections, have elected to bring it back into print as part of our continuing commitment to the preservation of printed works worldwide. We appreciate your understanding of the imperfections in the preservation process, and hope you enjoy this valuable book.

James Tate was born in Kansas City, Missouri, in 1943. He is the author of seventeen books of poetry, including Worshipful Company of Fletchers, which won the National Book Award in 1994; Selected Poems, which won the Pulitzer Prize and the William Carlos Williams Award in 1991; and The Lost Pilot, which was selected by Dudley Fitts for the Yale Series of Younger Poets. He has also published a novel and a collection of short stories, as well as edited The 1997 Best American Poetry Anthology. His honors include a National Institute of Arts and Letters Award for Poetry, the Tanning Prize, the Pulitzer Prize, the National Book Award, and fellowships from the Guggenheim Foundation and the National Endowment for the Arts. He teaches at the University of Massachusetts in Amherst.