Verwandte Artikel zu The Prologue to the Canterbury Tales of Geoffrey Chaucer;...

Chaucer, Geoffrey The Prologue to the Canterbury Tales of Geoffrey Chaucer; The Text Collated with the Seven Oldest Mss., and a Life of the Author, Introductory Notices

The Prologue to the Canterbury Tales of Geoffrey Chaucer; The Text Collated with the Seven Oldest Mss., and a Life of the Author, Introductory Notices 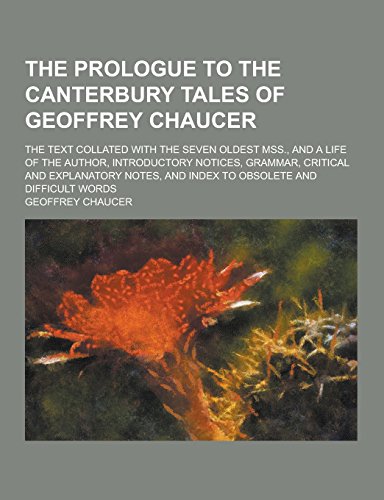 This historic book may have numerous typos and missing text. Purchasers can usually download a free scanned copy of the original book (without typos) from the publisher. Not indexed. Not illustrated. 1880 edition. Excerpt: ...207. Palfray = a horse for the road. Fr. palefroi, from Low L. paraveredus, from prefix para, and veredus, from Lat. veho, to carry or draw, and rheda, a four-wheeled carriage. 208. Wantoun.--Literally untrained, then lively, wild, &c. Wan is an O.E. negative prefix like un. We meet successively in Middle English the forms unitoioen, waniiowen, untoim, and wanton. Cf. to tow = to draw, and draw--train. TVdahope = despair, wcmtrust = distrust, &c. Merye--pleasant. Merryweather = fine weather. Bishop Burnet, Hist, of Reformation, bk. iii. (p. 189 of 1st folio ed.), says of the friars, "They were not so idle and lazy as the monks, but went about and preached and heard confessions and carryed about indulgences and many other pretty little things, Agnus Dei's, rosaries, and pebles, &c., and they had the esteem of the people wholly engrossed to themselves. They were also more formidable to princes than the monks, because they were poorer, and by consequence more hardy and bold.... They likewise... were great preachers, so that many things concurred to raise their esteem with the people very high, yet great complaints lay against them, for they went more abroad than the monks did, and were believed guilty of corrupting families." There were four orders of mendicant friars. L The Dominicans or preaching friars, who settled at Oxford in 1221, and were known as Black friars. 2. The Franciscans or Gray friars, founded by Francis of Assisi in 1209, and appearing in England in 1224. 3. The Carmelites or White friars, who first came here in 1240; and 4. The Augustin or Austin friars, introduced by Adewold, confessor to Henry I., whose vow included not only poverty and chastity but silence. Their superior in England was ex-officio...