Verwandte Artikel zu An enquiry into the present state of the Septuagint...

Owen, Henry An enquiry into the present state of the Septuagint version of the Old Testament 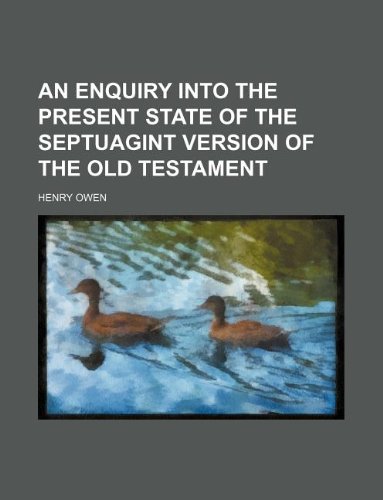 This historic book may have numerous typos and missing text. Purchasers can download a free scanned copy of the original book (without typos) from the publisher. Not indexed. Not illustrated. 1769 Excerpt: ...--where the authority of MSS. or parallel places will bear him out--to their full, uniform and just orthography. reason reason of a practice, which, being general among them, is continually taken notice of, but has not yet, in my opinion, been so well accounted for:--I mean, the reason of their pointings their common Bibles and reserving their Synagogue ones without points. And that this is no fanciful reason appears from the words of Rabbi Bechai, as cited by Buxtorf in his Tiberias, p/45. "Jufli "sumus non punctare librum Legis, quia "vox punctata Omnem sensuum varietatem ' ct multiplicationem excludit, fed ablatio « punctorum earn parit." SECTION IX. UPON these grounds, and by these artifices, the Jews made many and signal alterations in the Septuagint Version; and noŁ a few in their own Books. At what time these alterations were made--how they increased--and by what means they were propagated, it is no easy matter to determine. This, however, we may observe; that as Christianity got footing first in Judea, G and and was supported there by the Gospel of St. Matthew--which Gospel contains no less than forty quotations; all taken, I believe, originally from the Septuagint Version--so it is not unlikely, that the Jews, who lived in that country, and used the Hebrew Scriptures in their Synagogues, were the first that objected to the faithfulness and propriety of this Version., as being the first: that were concerned in examining the passages quoted from it. Nothing could be more offensive to the Jews, as nothing could be more prejudicial to their cause, than the Gospel now mentioned. It was therefore by all means to be opposed. But since the facts it contained could not be disproved, they hr,d nothing left but to invalidate the ...