Vaughan, Roger William Bede The Life and Labours of Thomas of Aquin (Volume 1)

The Life and Labours of Thomas of Aquin (Volume 1) 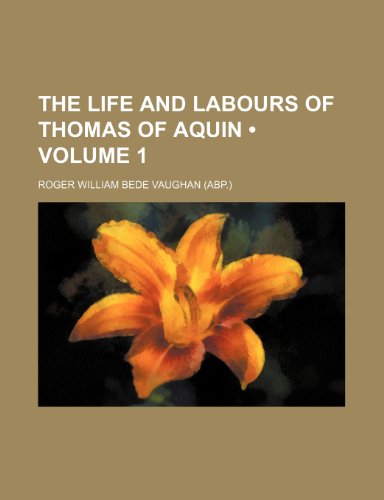 This historic book may have numerous typos, missing text or index. Purchasers can download a free scanned copy of the original book (without typos) from the publisher. 1871. Not illustrated. Excerpt: ... CHAPTER XXIV. MONASTIC PRINCIPLES EXALTED. It would not be doing justice to the labours of S. Thomas at this period, to omit very briefly to touch on his work: "Against those who Hinder Men from Entering Religion;" and his tract: "On the Perfection of the Spiritual Life." Besides, these writings, unlike his other ones, are also an apology for the state which he embraced himself, and persevered in, in spite of the warm opposition of his nearest relatives.* The first-named treatise commences with a very beautiful introduction, showing how our Lord's whole life teaches man to abstract himself from earthly things, and to fix himself on those which are of heaven, f This one aim, the devil * These are the respective titles of the Opuscula in question :--" Con^ tra Pestiferam Doctrinam Retrahentium Homines a Religionis Ingressu." (Tom. XV., Opusc. Ill, p. 103--125): then, "De Perfection Vita Spirituals." (Tom. XV., Opusc. II., p. 76--102.) + "Christians religionis propositum in hoc prsecipue videtur consistere, ut a terrenis homines abstrahat, et spiritualibus faciatesse intentos. Hinc est quod auctor fidei, et consummator Jesus in hunc mundum veniens ssecularium rerum contemptum et facto, et verbo suis hdelibus incessantly labours to defeat. Jovinian and Vigilantius did their best to upset the monastic principle, but they were both confuted by S. Jerome, who slew the unclean animal of heresy. But one of the heads of the beast has come to life again; and a new following of Vigilantius has arisen, which would cunningly withdraw men from their desire of dedicating themselves to God. First, these men declare that nobody ought to enter religion, and practise the counsels of perfection, who has not been previously exercised in the precepts.* Thus, boys, and recent converts,...