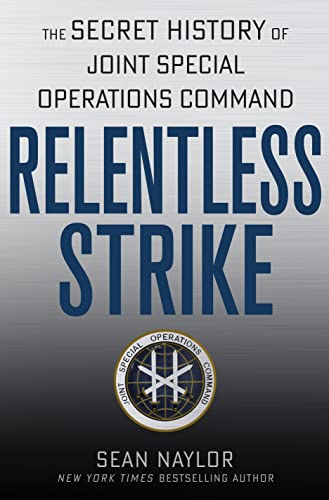 "Naylor informs and provokes . . . . His interviews with inside sources endow the narrative with a wealth of information, and the book benefits from Mr. Naylor's familiarity with the subject . . . . Naylor succeeds splendidly in showing how and why the Joint Special Operations Command evolved--and why it will remain a valuable weapon." --Wall Street Journal

"All the intrigue one would expect from the stories of America's most highly classified and secretive military units. . . . Relentless Strike is likely the best definitive history of how America's special operations community rose like a Phoenix from the ashes of the Desert One fiasco to become the most capable elite fighting force in the world." --Washington Monthly

"Naylor provides a step-by-step, mission-by-mission, behind-the-scenes account as special operations units under JSOC's umbrella, such as Delta Force and SEAL Team 6, along with its use of drone aircraft to monitor and attack terrorist targets, became better known than JSOC itself. Along the way, he offers numerous revelations." --Pittsburgh Tribune-Review

"Fascinating...[Relentless Strike] might've sunk from the weight of its alphabet-agency acronyms in lesser hands. But Naylor, who spent 23 years covering military affairs at Army Times, often accompanying units into battle, sprinkles his 518 pages of heavily footnoted text with plenty of headline-worthy anecdotes. Naylor clearly admires the skill, tenacity and creativity of such troops. You'd think that the U.S. Special Operations Command...would quietly, if not publicly, appreciate the publication of this authoritative, largely admiring, history." --Newsweek

"Relentless Strike [is] the real thing. . . . You will be fascinated. . . . Naylor has an unusual problem for a writer: He knows too damn much." - Foreign Policy

"Naylor (Not a Good Day to Die), a journalist who specializes in covering special operations, has produced the most complete history to date of the most secret organization within the U.S. military: the Joint Special Operations Command (JSOC). Given the organization's super-secret status, much of Naylor's engrossing material was gleaned from hundreds of interviews with former members. . . . Naylor's powerful and informative history is essential to understanding America's evolving military capability and the on-going war against global terrorism." --Publishers Weekly

"A highly readable book that is part military history and part Tom Clancy novel, drawing the reader into tales of bravery and sacrifice on a sometimes unimaginable scale. . . . The history of America's most elite fighting force is told with panache and critical analysis, making this one of the must-read military history books of the year." --NY Journal of Books

"The deeply reported, richly sourced, heavily footnoted tome tells the story of the creation of the world's most effective and lethal manhunting organization. . . . What makes Relentless Strike an indispensable history and a hell of a read is how Naylor uses his tremendous access to the community, a treasure of existing literature and documents on the subject, and superb insight to craft a book that informs and entertains." --Tampa Bay Tribune

"A superb piece of writing . . . . An exceptionally well written, lucid and comprehensive account as to the rise and supremacy of the Joint Special Operations Command (JSOC) on today's battlefields. . . . The book is extraordinary and is probably better and more detailed than that which would be produced by the several Command historians." --Foreign Policy

"Over the past quarter-century, Sean Naylor has become one of the country's foremost experts on special operations forces." --Military Times

"A smoothly penned and thoroughly researched account of an important military asset in the ongoing U.S. war against terrorism." --Library Journal

"A history of the Joint Special Operations Command, one of the most elite and little-understood pieces of the American military. While most people know about Delta Force and SEAL Team 6, few have heard of their umbrella group, JSOC. . . . Naylor delivers an unquestionably comprehensive history." --Kirkus Reviews

"Increasingly viewed as a 'must read' in the defense community" - Mark Safranski, Zenpundit.com

Since the attacks of September 11, one organization has been at the forefront of America's military response. Its efforts turned the tide against al-Qaida in Iraq, killed Bin Laden and Zarqawi, rescued Captain Phillips and captured Saddam Hussein. Its commander can direct cruise missile strikes from nuclear submarines and conduct special operations raids anywhere in the world.

Relentless Strike tells the inside story of Joint Special Operations Command, the secret military organization that during the past decade has revolutionized counterterrorism, seamlessly fusing intelligence and operational skills to conduct missions that hit the headlines, and those that have remained in the shadows-until now. Because JSOC includes the military's most storied special operations units-Delta Force, SEAL Team 6, the 75th Ranger Regiment-as well as America's most secret aviation and intelligence units, this is their story, too.

Relentless Strike reveals tension-drenched meetings in war rooms from the Pentagon to Iraq and special operations battles from the cabin of an MH-60 Black Hawk to the driver's seat of Delta Force's Pinzgauer vehicles as they approach their targets. Through exclusive interviews, reporter Sean Naylor uses his unique access to reveal how an organization designed in the 1980s for a very limited mission set transformed itself after 9/11 to become the military's premier weapon in the war against terrorism and how it continues to evolve today.

Buchbeschreibung Hardcover. Zustand: New. Hardcover. Shipping may be from multiple locations in the US or from the UK, depending on stock availability. 560 pages. 0.840. Bestandsnummer des Verkäufers 9781250014542