Verwandte Artikel zu The Far East and the New America, Vol. 6: A Picturesque...

G. Waldo Browne The Far East and the New America, Vol. 6: A Picturesque and Historic Account of These Lands and Peoples, with the Following Special Articles China (Cl

The Far East and the New America, Vol. 6: A Picturesque and Historic Account of These Lands and Peoples, with the Following Special Articles China (Cl 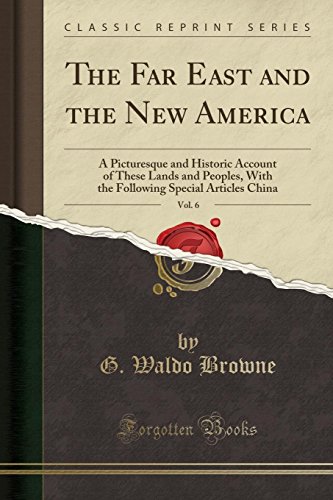 Excerpt from The Far East and the New America, Vol. 6: A Picturesque and Historic Account of These Lands and Peoples, With the Following Special Articles China

It has been impossible to follow any hard and fast policy, but we have had to meet the different conditions in different parts of the province as best we could, giving more here and less there, but giving only just enough to make it possible for the people to reestablish themselves upon the most economical basis.

After all, it has been a good deal like housekeeping on a gigantic scale, and, as some of our best and ablest men have sprung from the very poorest families, and their development under conditions of the greatest hardships and adversity has tended to foster the very qualities which have made them successful in after life, so will the desperate struggles which these little municipalities are now having tend to make them all the better in the future. They are learning the necessity of the closest attention to every little detail. In many of them men are serving in public positions for no salary, giving their whole time to establishing affairs upon a prosperous basis. Schoolteachers are working for less than their former salaries, as indeed are all the officials of the province, but they are working cheerfully, and the Spirit which is developing among them promises much for the future.

Disorders are few, and travellers passing through the province find everywhere open-hearted hospitality and cheerful greetings. The disposition of the people is buoyant and cheerful, and it is very improbable that anv extensive police force will be needed, even in the wilder portions of the interior, after the people are once more fairly reestablished on their plantations.

This book is a reproduction of an important historical work. Forgotten Books uses state-of-the-art technology to digitally reconstruct the work, preserving the original format whilst repairing imperfections present in the aged copy. In rare cases, an imperfection in the original, such as a blemish or missing page, may be replicated in our edition. We do, however, repair the vast majority of imperfections successfully; any imperfections that remain are intentionally left to preserve the state of such historical works.