Verwandte Artikel zu The Influence of Public Opinion on Post

Dieck H. The Influence of Public Opinion on Post 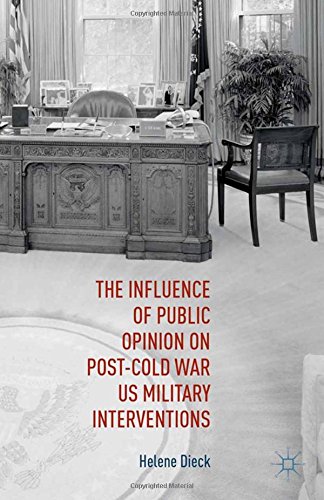 "Drawing on a great many interviews with decision makers, the author makes one of the most persuasive cases to date for how public opinion - and anticipated public opinion - has constrained military interventions by American presidents." - Robert Y. Shapiro, Professor of Political Science, Columbia University, USA

"Drawing broadly on the literature and enriched by extensive interviews, Dieck's work provides an important contribution to understanding the politics of US decisions to use military force. Some keen insights on the impact of public opinion and the scope and limits of recent American Presidents' domain of choice in making such fateful decisions." - Bruce W. Jentleson, Professor of Public Policy and Political Science, Duke University, USA

"Helene Dieck has provided an insightful account of public opinion's impact on post - Cold War American war making. Looking well beyond the effect of public attitudes on the go-no go decision to launch any operation, Dieck also examines the impact of opinion on the shape and duration of these operations, and decision made during their subsequent conduct. In so doing she demonstrates that public opinion has indeed played an important role in shaping the course of America's military operations in Africa, Haiti, the Balkans, Iraq, and Afghanistan." - James Dobbins, Distinguished Chair in Security and Diplomacy, the RAND Corporation, USA

Based on interviews with political decision-makers involved in post-Cold War case studies, this research reassesses the prevalent conclusion in the academic literature, according to which American public opinion has limited influence on military interventions, by including the level of commitment in the study of the decision-making process.