House Of Mystery TP Vol 03 The Space Between 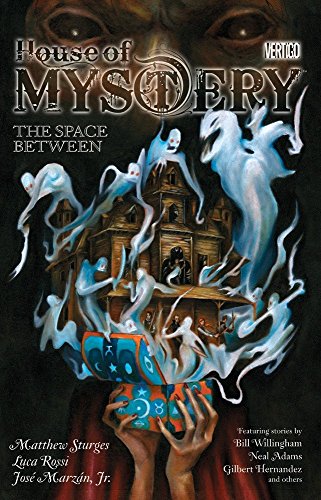 The characters trapped inside the House of Mystery finally discover how and why they've been imprisoned there in this newest HOUSE OF MYSTERY volume collecting issues #11-15. This title includes issue #13, with art by comics superstars Neal Adams, Gilbert Hernandez and others.

Matthew Sturges has written a number of comics for DC, including House of Mystery, Justice Society of America, and the Eisner-nominated Jack of Fables (with Bill Willingham). He has also written the novel Midwinter, available from Pyr, and its sequel The Office of Shadow. Bill Willingham has been writing, and sometimes drawing, comics for more than 20 years. During that time, he's had work published by nearly every comics publisher in the business, and he's created many critically acclaimed comic book series, including Elementals, Coventry, Proposition Players, and of course the seminal Vertigo series Fables, as well as its spin-off series Fairest, Jack of Fables and The Literals. His work has been nominated for many awards, including the Eisner, Harvey, and Ignatz comic industry awards and the International Horror Guild award. He lives somewhere near a good poker room. Chris Roberson's writings include the novels Here, There & Everywhere, The Voyage of Night Shining White, Paragaea: A Planetary Romance, X-Men: The Return, Set the Seas on Fire, The Dragon's Nine Sons, End of the Century, Iron Jaw and Hummingbird, Three Unbroken, Warhammer 40K: Dawn of War II, and the comic book series Cinderella: From Fabletown with Love. He also co-created iZombie with Michael Allred, which has been adapted into a hit TV series on the CW. He has been a finalist for the World Fantasy Award four times--once for writing, once for editing, and twice for publishing--twice a finalist for the John W. Campbell Award for Best New Writer, and four times for the Sidewise Award for Best Alternate History.

1. House of Mystery Vol. 3: The Space Between

3. House of Mystery, Volume 3: The Space Between

4. House of Mystery Vol. 3: The Space Between

5. House of Mystery 3: The Space Between

6. House of Mystery Vol. 3: The Space Between