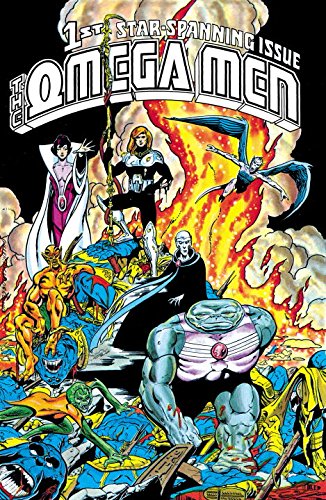 Dedicated to freeing conquered worlds from the clutches of the Citadel, the Omega Men team up with DC heroes to spread freedom at any cost. In these tales, the Omega Men first appear as they run into Green Lantern, The New Teen Titans and Superman, who they recruit into their struggles against the Citadel. But as their battles grow more difficult, they must take increasingly brutal measures to stop the Citadel from expanding further. This volume includes the debut of the anti-hero bounty hunter known as Lobo.

One of the most prolific and influential writers in modern comics, Marv Wolfman began his career as an artist. Realizing that his talents lay more in writing the stories than in drawing them, Wolfman soon became known for his carefully crafted, character-driven tales. In a career that has spanned nearly 30 years, Wolfman has helped shape the heroic careers of DC Comics' Green Lantern, Blackhawk and the original Teen Titans, as well as Marvel Comics' Fantastic Four, Spider-Man and Nova. In addition to co-creating The New Teen Titans and the universe-shattering Crisis on Infinite Earths with George Pérez, Wolfman was instrumental in the revamp ofSuperman after Crisis, the development of The New Teen Titans spinoff seriesVigilante, Deathstroke The Terminator and Team Titans, and created such characters asBlade for Marvel, along with Night Force and the retooled Dial "H" For Hero for DC. In addition to his numerous comic book credits, Wolfman has also written several novels and worked in series television and animation, including theSuperman cartoon of the late 1980s and currently the hit Teen Titans show on Cartoon Network. His novelization ofCrisis on Infinite Earths was published in the spring of 2005 by iBooks.