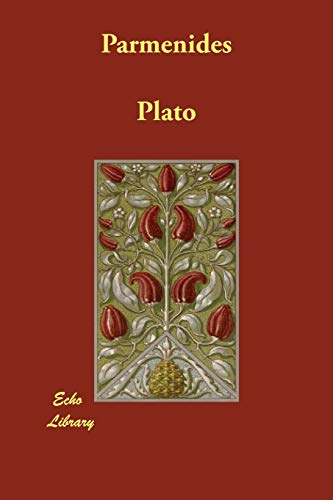 I understand, said Socrates, and quite accept your account. But tell me, Zeno, do you not further think that there is an idea of likeness in itself, and another idea of unlikeness, which is the opposite of likeness, and that in these two, you and I and all other things to which we apply the term many, participate--things which participate in likeness become in that degree and manner like.

The Parmenides purports to be an account of a meeting between the two great philosophers of the Eleatic school, Parmenides and Zeno of Elea, and a very young Socrates. The occasion of the meeting was the reading by Zeno of his treatise defending Parmenidean monism against those partisans of plurality who asserted that Parmenides' supposition that there is a one gives rise to intolerable absurdities and contradictions.

Employing his customary method of attack, the reductio ad absurdum, Zeno has argued that if as the pluralists say things are many, then they will be both like and unlike; but this is an impossible situation, for unlike things cannot be like, nor like things unlike. But this difficulty vanishes, says Socrates, if we are prepared to make the distinction between sensibles on the one hand and Forms, in which sensibles participate, on the other. Thus one and the same thing can be both like and unlike, or one and many, by participating in the Forms of Likeness and Unlikeness, of Unity and Plurality; I am one man, and as such partake of the Form of Unity, but I also have many parts and in this respect I partake of the Form of Plurality. There is no problem in demonstrating that sensible things may have opposite attributes; what would cause consternation, and earn the admiration of Socrates, would be if someone were to show that the Forms themselves were capable of admitting contrary predicates.

At this point, Parmenides takes over as Socrates' interlocutor and dominates the remainder of the dialogue. After establishing that Socrates himself has made the distinction between Forms and sensibles, Parmenides asks him what sorts of Form he is pre