The Birds of Africa: Volume IV: 4

The Birds of Africa: Volume IV: 4 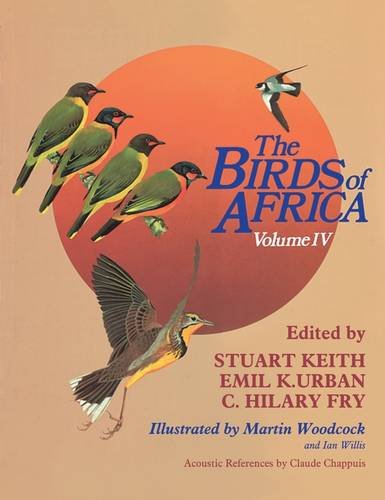 Reseńa del editor:
Universally recognised as by far the most authoritative work ever published on the subject, The Birds of Africa is a superb multi-contributor reference work, with encyclopaedic species texts, stunning paintings of all species and numerous subspecies, hundreds of informative line drawings, detailed range maps, and extensive bibliographies. Each volume contains an Introduction that brings the reader up to date with the latest developments in African ornithology, including the evolution and biogeography of African birds. Diagnoses of the families and genera, often with superspecies maps, are followed by the comprehensive species accounts themselves. These include descriptions of range and status, field characters, voice, general habits, food, and breeding habits. Full bibliographies, acoustic references, and indexes complete this scholarly work of reference. This fourth volume in the series deals comprehensively with broadbills, pittas, larks, swallows and martins, wagtails, pipits and longclaws, cuckoo-shrikes, bulbuls, waxwings, dippers, wrens, accentors, and chats. The editors and artists have worked closely with other authors - all acknowledged experts in their field - to produce a superb reference in which comprehensive texts on every species are complemented by accurate and detailed paintings and drawings of the birds themselves.
Biografía del autor:
Hilary Fry has had a distinguished career in African ornithology, including lengthy teaching posts in Nigeria, Aberdeen and Oman. He co-founded the West African Ornithological Society and edited its journal Malimbus for many years, and is the author of more than 200 publications. Stuart Keith was a Research Associate at the American Museum of Natural History. During his many trips to Africa for the museum he pioneered the tape-recording of forest birds band published the groundbreaking Birds of the African Rain Forests. Emil Urban has held professorships at Haile Selassie 1 University in Addis Ababa, University of Arkansas and Augusta State University, Georgia. he has published numerous papers on African birds including A Checklist of Birds of Ethiopia. Martin Woodcock is an acclaimed artist and illustrator whose work has graced many books covering the birds of such diverse locations as India, South-East Asia and Oman. His crowning achievement is that he painted virtually all the plates for the entire Birds of Africa series. He also served as president of the African Bird Club for many years.