A Distant View of Everything (Isabel Dalhousie Novels) 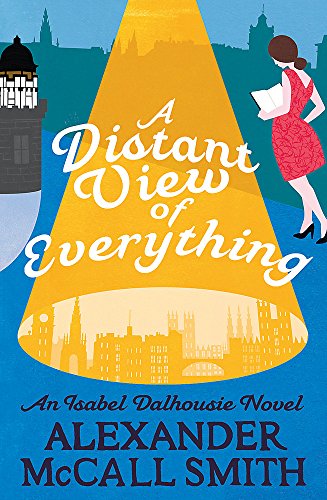 Isabel Dalhousie now has a second child - another boy, Magnus. He comes home with her at the beginning of the book and she discovers that Charlie is far from thrilled. He sees no need for a new baby.

In Cat's delicatessen, Isabel meets a woman with whom she had been at school. This woman, Bea Shand, is known as an enthusiastic match-maker. She is very worried, though, as she has introduced a woman she knows to a plastic surgeon who is now described by another friend as a gold-digger. This other friend reveals that the surgeon has a bad track record: he has been involved with a series of well-off women and has succeeded in separating a number of then from their money. Bea asks Isabel to investigate; she herself tried to warn her friend of the danger she was in but was rebuffed badly.

Isabel starts to make enquiries. At first the pattern that emerges confirms her friend's dire diagnosis, but as things develop it emerges that not only is the surgeon innocent, but he himself is the one in danger!

In the meantime, as a sub-plot, Isabel finds that the man who warned her of the surgeon's proclivities, is taking an interest in her (Isabel). He appears to be smitten by her; she tries to get away from him but discovers that she has inadvertently given Jamie grounds to believe that she (Isabel) is having an affair. This is awkward, but is resolved satisfactorily.

Her final conclusion: match-make at one's peril. Never tell people half-truths for paternalistic reasons. Mind your own business (a lesson that Isabel never seems to learn).

1. A Distant View of Everything (Isabel Dalhousie Novels)

Buchbeschreibung HACHETTE INDIA. Zustand: Good. Ships from the UK. Former Library book. Shows some signs of wear, and may have some markings on the inside. Bestandsnummer des Verkäufers 16951186-20

2. A Distant View of Everything (Isabel Dalhousie Novels)

Buchbeschreibung HACHETTE INDIA. Paperback. Zustand: Very Good. The book has been read, but is in excellent condition. Pages are intact and not marred by notes or highlighting. The spine remains undamaged. Bestandsnummer des Verkäufers GOR008649619

3. A Distant View of Everything (Isabel Dalhousie Novels)

4. A Distant View of Everything (Isabel Dalhousie Novels)

Buchbeschreibung Little, Brown, 2017. Paperback. Zustand: Very Good. Very Good: a copy that has been read, but is in excellent condition. Pages are intact and not marred by notes or highlighting. The spine remains undamaged. Most items will be dispatched the same or the next working day. Bestandsnummer des Verkäufers wbb0016336217

7. A Distant View Of Everything