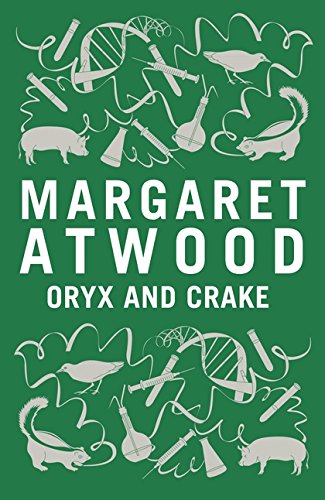 Críticas:
'Oryx and Crake is Atwood at her best - dark, dry, scabrously witty, yet moving and studded with flashes of pure poetry. Her gloriously inventive brave new world is all the more chilling because of the mirror it holds up to our own. Citizens, be warned.' Independent 'Oryx and Crake can hold its own against any of the 20th century's most potent dystopias - Brave New World, 1984, The Space Merchants - with regard to both dramatic impact and fertility of invention Oryx and Crake showcases a nightmare version of the present era of globalization on a globe coming apart at its ecological seams It is a scathing (because bang-on) portrait of the way we live now Majestic' Washington Post 'Contemporary novelists rarely write about science or technology. Margaret Atwood tackles both - and more - in one of the year's most surprising novels' Economist 'Oryx and Crake is Atwood at her playful, allegorical best' Globe and Mail
Reseńa del editor:
Margaret Atwood's classic novel, The Handmaid's Tale, is about the future. Now, in Oryx and Crake, the future has changed. It's much worse and bleaker. And we're well on the road to it now. The narrator is Snowman (a man once known as Jimmy), self-named though not self-created. As the story begins, he's sleeping in a tree, wearing a dirty old bedsheet, mourning the loss of his beautiful and beloved Oryx and his best friend Crake, and slowly starving to death. Earlier, Snowman's life was one of comparative privilege. Crake and Jimmy live with all the other smart, rich people in the Compounds - gated company towns owned by biotech corporations. (Ordinary folks are kept outside the gates in the chaotic 'pleeblands'.) Meanwhile, beautiful Oryx, raised as a child prostitute in Southeast Asia, finds her way to the West and meets Crake and Jimmy, setting up an inevitable love triangle. How did everything fall apart so quickly? Was he himself in any way responsible? Why is he now left alone with his bizarre memories - except for the more-than-perfect, green-eyed Children of Crake, who think of him as a kind of monster? He explores the answers to these questions in the double journey he takes - into his own past, and back to Crake's high-tech bubble dome, where the Paradice Project unfolded and the world came to grief. With breathtaking command of her shocking material and with her customary sharp wit and dark humour, Atwood projects us into a less-than-brave new world, an outlandish yet wholly believable space populated by a cast of characters who will continue to inhabit your dreams long after the last chapter

Buchbeschreibung Hardcover. Zustand: New. Zustand des Schutzumschlags: New. London. Bloomsbury Publishing PLC. 2013. Special Edition. No dust wrapper as issued. Hard Cover. Green cloth boards with elaborate silver objects embellished on the front. Silver titles to spine with 70 at the head. Faint mark to front board which is inconspicuous. Grey and white decorative endpapers with grey ribbon marker. Extremely scarce limited edition copy. A novel as speculative fiction and adventure romance, It focuses on a lone character called Snowman, who finds himself in a bleak situation with only creatures called Crakers to keep him company. The reader learns of his past, as a boy called Jimmy, and of genetic experimentation and pharmaceutical engineering that occurred under the purview of Jimmy's peer, Glenn "Crake". The book was first published by McClelland and Stewart. It was shortlisted for the 2003 Man Booker Prize for Fiction, as well as for the 2004 Orange Prize for Fiction. Bestandsnummer des Verkäufers DEC28006