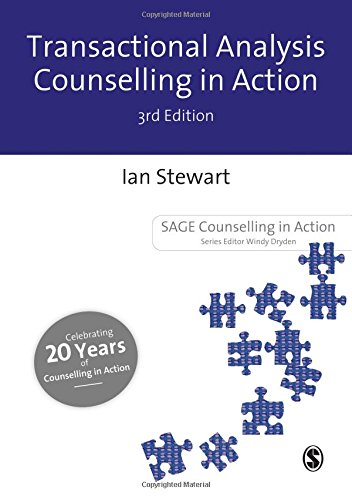 SAGE celebrated the 20th Anniversary of the Counselling in Action in November 2008. To view the video - click here

Praise for the First Edition:

`Ian Stewart has made the difficult link between theory and practice clear without being patronizing. This is valuable for everyone interested in TA since many concepts can only be fully assimilated when linked to actual examples. Even if you are not in clinical practice, this book would be a useful addition to your library and, for anyone in training or beginning practice, this is required reading' - Group Relations

Transactional Analysis Counselling in Action, Third Edition meets a demand for a clearly-written step-by-step account of the process and practice of using transactional analysis to promote personal change.

This book retains the successful overall structure and organisation of the popular earlier editions, but has been fully revised. Key features of this new edition include:

" concise, "hands-on" descriptions of current techniques and concepts in transactional analysis, presented in an accessible style that is immediately useful to the practitioner

" the sequence of chapters ordered to reflect successive stages in the typical process of therapeutic change using transactional analysis. This assists in building understanding and application of transactional analysis step by step, in the order that is likely to arise during actual psychotherapy or counselling

" "Self-supervision sequences" offering suggested checklists of questions that readers can use in appraising their own work with clients.

In this revised Third Edition of his bestselling guide, Ian Stewart offers trainee and practising psychotherapists and counsellors an introduction to the core concepts and basic techniques of transactional analysis.

Ian Stewart is Co-Director of The Berne Institute, Nottingham. He is accredited by the ITAA and the EATA as a Teaching and Supervising Transactional Analyst.

Ian Stewart was born in Glasgow in 1940. He received his secondary education at Glasgow Academy and went on to study at Pembroke College, Oxford. Graduating in 1961, he worked for five years in the scientific Civil Service in Edinburgh. In 1966 he emigrated to England to take up a Research Fellowship at Nottingham University. On conclusion of his research contract he stayed on at Nottingham as a lecturer, gaining his PhD degree in 1970.

Ian's first contact with psychotherapy was as a client. While continuing his own personal therapy, he developed a growing interest in the theory and method of psychotherapy generally and transactional analysis in particular. He entered formal TA training in 1979, and gained accreditation as a TA practitioner in 1984. For several years Ian followed two parallel careers, as lecturer and as psychotherapist. In the end, psychotherapy won the day: in 1989 Ian resigned his university lectureship to pursue a full-time career as a TA psychotherapist, writer and trainer.

Ian is the author, with co-author Vann Joines, of the basic text on transactional analysis, TA Today. First published in 1987, the book has been translated into fifteen languages and is widely regarded as the world-standard introduction to its subject. Its second edition appeared in 2012. Ian is Co-Director of The Berne Institute, a TA training centre which celebrates its twentieth anniversary in 2013.

Ian lives in a small village in the backwoods of Leicestershire, together with his wife and three cats. His leisure interests include Morris dancing, cycling, fitness activities generally, and the appreciation of real ale.