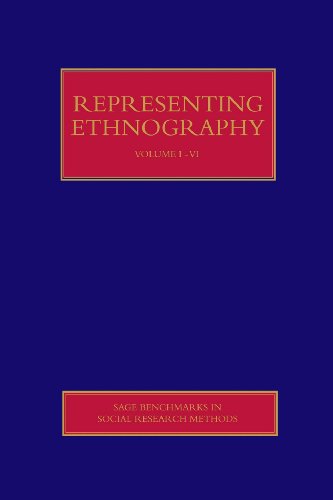 Qualitative research, especially ethnography, has seen a paradigm shift since 1968. This so-called 'Third Moment' was concerned with the critical issue of the textual representation of ethnographic work. There was a call for a turn towards texts that mirrored the messiness of social life, that were faithful to the many voices of social worlds, in which the artfulness of ethnographic writing was manifest and in which the ethnographer was visibly present in the text.

Representing Ethnography brings together into one set all the important material on this 'rhetorical turn' in qualitative research. Many of the critiques of the rhetorical turn are particularly hard to obtain and have never been gathered together in an accessible way.

Volume I focuses on the contexts and controversies of this type of discourse.

Volume II covers the reading of qualitative research in a range of disciplines, such as sociology, anthropology and history, and gives classic examples of the ways in which text can be read.

Volume III examines the rhetorical turn in terms of analysis and voice.

Volume IV showcases how ethnographic realities are represented to give readers a good coverage of all the possibilities.

Paul Atkinson is Emeritus Professor of Sociology at Cardiff University. His current interest is the work of artists and craft workers. His books include Thinking Ethnographically (Sage, 2017), For Ethnography (Sage, 2014), Everyday Arias (AltaMira, 2006), Interactionism (coauthored with William Housley; Sage, 2003), Key Themes in Qualitative Research (coauthored with Amanda Coffey and Sara Delamount; AltaMira, 2003). He and Sara Delamont were the founding editors of the journal Qualitative Research (Sage). He coedited the Sage Handbook of Ethnography (2001). He is a fellow of the Academy of Social Sciences and a fellow of the Learned Society of Wales.