Bingley, Will Gonzo: A Graphic Biography of Hunter S. Thompson 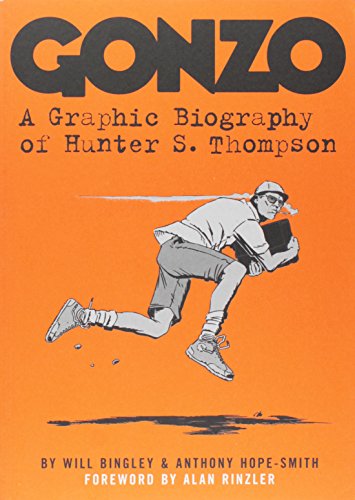 Over the course of Hunter S. Thompson’s extraordi­nary life he was publicly branded a bum, a vandal, a thief, a liar, an addict, a freak, and a psychopath. Some of which were true. Yet even when compared to the most significant figures of the 20th century, his legacy retains a brilliantly vital force. The great American writer, the great American iconoclast, the great American hedonist—however you choose to view him, Thompson remains the high-water mark for all social commentators worldwide, and a truly fearless champion of individual liberties. This is his story, the story of a troubled kid from Louisville who went on to become an international icon. A story that plumbs the darkest depths of American society and charts the now legendary adventures that birthed Gonzo Journalism, Fear and Loathing in Las Vegas, and a lifestyle beyond imagination.

Praise for Gonzo:
“I was attracted to its bright orange cover and the drawing of the long-legged Thompson clutching a satchel, running away from something. It was enough to entice me to crack open the book. I didn't stop reading until I was finished, past my bedtime, a couple of hours later.” —Boing Boing

“This diamond-sharp graphic biography is a witty, thoughtful book . . . Bingley and Hope-Smith’s portrait is brave and badass, taking the kind of chances Thompson would have appreciated.” —Publishers Weekly

"Exactly what it says on the tin . . . brilliant." —Brain Pickings

Will Bingley began his career in the film industry, working as a scriptwriter and script editor on several major studio productions before moving into TV and advertising work. He is a contributor to several major U.S. anthologies and journals. Anthony Hope-Smith studied graphic design and animation and now works as an illustrator. This is his first full-length graphic novel.

2. GONZO: A GRAPHIC BIOGRAPHY OF HU