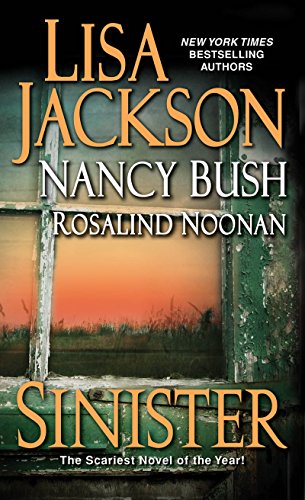 Three best-selling authors combine to tell the tale of a crazed killer who stalks a wealthy Wyoming family. Original.

LISA JACKSON is the #1 New York Times bestselling author of over ninety-five novels, including You Will Pay, After She’s Gone, Deserves to Die, You Don’t Want to Know, Running Scared, and Shiver. She is also the co-author of the Colony Series, written with her sister and bestselling author Nancy Bush, as well as the collaborative novels Sinister and Ominous, written with Nancy Bush and Rosalind Noonan. There are over thirty million copies of her novels in print and her writing has been translated into nineteen languages. She lives with her family and three rambunctious dogs in the Pacific Northwest. Readers can visit her website at www.lisajackson.com and find her on Facebook.

Buchbeschreibung Paperback. Zustand: New. Language: English. Brand new Book. New York Times bestselling authors Lisa Jackson, Nancy Bush, and Rosalind Noonan unite their talents in this riveting novel of family secrets, obsession, and murder. . . A Killer's Patience Twenty years ago, a fire ravaged the Dillinger family's old homestead, killing Judd Dillinger and crippling his girlfriend. Most people blamed a serial arsonist who'd been seen around town. But strange things are happening in Prairie Creek, Wyoming, again. Will Be Rewarded Ira Dillinger, the family's wealthy patriarch, has summoned his children home for his upcoming wedding. Eldest son, Colton, and his siblings don't approve of their father's gold-digging bride-to-be. But someone is making his displeasure felt in terrifying ways, setting fires just like in the past. Only this time, there will be no survivors. In Blood As fear and distrust spread through Prairie Creek, soon all the Dillingers, and those closest to them, are targets--and suspects. A killer has been honing his skill, feeding his fury, and waiting for the moment when the Dillingers come home--to die. . . Bestandsnummer des Verkõufers BZV9781420125788