Weisz, George Chronic Disease in the Twentieth Century: A History

Chronic Disease in the Twentieth Century: A History 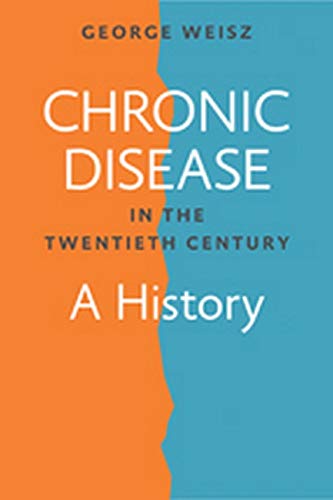 "This book is brave and insightful and succeeds in raising the possibility that cultural histories of health must acknowledge the distinct vocabulary and sociocultural definitions that are inherent to specific disease states. It is full of potential leads and insights, reference and analysis that will be consulted time and time again."

"This is a valuable resource for all academic professionals in the health field, especially those in public policy."

"This is a valuable study. It is the first long overview of the emergence of one of the most significant health policy issues in modern times."

"As this book shows, chronic disease has long been neglected, by both health care systems and historians. Weisz took up the challenge of writing the history of a diffuse and undramatic concept, and has done it well."

"The recent globalisation of 'chronic disease' serves to demonstrate the importance of Weisz's book not just for historians of medicine, but for policy makers and practitioners too. By highlighting the constructed nature of 'chronic disease' Weisz draws attention to the political foundations of a category too often taken for granted. Crisply written, clearly structure, and presenting a wealth of detail without ever overwhelming, this is sure to become a classic text."

"The book is scholarly, builds on the work of prominent thinkers in the field such as Daniel Fox, and provides new insights on the history of American health care."

"Weisz has produced an intriguing and original argument that will be of great interest to historians of health care and health care policy, in both national and international contexts."

"Weisz presents a highly original argument that will greatly enrich our historical understanding of chronic disease and the medical, public health, and policy response to it. It will also contribute to an understanding of the peculiarities of American health care and health care politics, and the relatively minimal success of health care reform."

Long and recurring illnesses have burdened sick people and their doctors since ancient times, but until recently the concept of "chronic disease" had limited significance. Even lingering diseases like tuberculosis, a leading cause of mortality, did not inspire dedicated public health activities until the later decades of the nineteenth century, when it became understood as a treatable infectious disease. Historian of medicine George Weisz analyzes why the idea of chronic disease assumed critical importance in the twentieth century and how it acquired new meaning as one of the most serious problems facing national healthcare systems.

Chronic Disease in the Twentieth Century challenges the conventional wisdom that the concept of chronic disease emerged because medicine's ability to cure infectious disease led to changing patterns of disease. Instead, it suggests, the concept was constructed and has evolved to serve a variety of political and social purposes.

How and why the concept developed differently in the United States, the United Kingdom, and France are central concerns of this work. In the United States, anxiety about chronic disease spread early in the twentieth century and was transformed in the 1950s and 1960s into a national crisis that helped shape healthcare reform. In the United Kingdom, the concept emerged only after World War II, was associated almost exclusively with proper medical care for the elderly population, and became closely linked to the development of geriatrics as a specialty. In France, the problems of elderly and infirm people were handled as technical and administrative matters until the 1950s and 1960s, when medical treatment of elderly people emerged as a subset of their wider social marginality.

While an international consensus now exists regarding a chronic disease crisis that demands better forms of disease management, the different paths taken by these countries during the twentieth century continue to exert profound influence. This book seeks to explain why, among the innumerable problems faced by societies, some problems in some places become viewed as critical public issues that shape health policy.

1. Chronic Disease in the Twentieth Century - A History

2. Chronic Disease in the Twentieth Century: A History

Buchbeschreibung 2014. Paperback. Zustand: New. Paperback. Long and recurring illnesses have burdened sick people and their doctors since ancient times, but until recently the concept of chronic disease had limited significance. Even lingering dis.Shipping may be from multiple locations in the US or from the UK, depending on stock availability. 328 pages. 0.454. Bestandsnummer des Verkäufers 9781421413037

Buchbeschreibung 2014. Paperback. Zustand: New. Paperback. Long and recurring illnesses have burdened sick people and their doctors since ancient times, but until recently the concept of chronic disease had limited significance. Even .Shipping may be from our Sydney, NSW warehouse or from our UK or US warehouse, depending on stock availability. 328 pages. 0.454. Bestandsnummer des Verkäufers 9781421413037

5. Chronic Disease In The Twentieth Century: A History

6. Chronic Disease In The Twentieth Century: A History