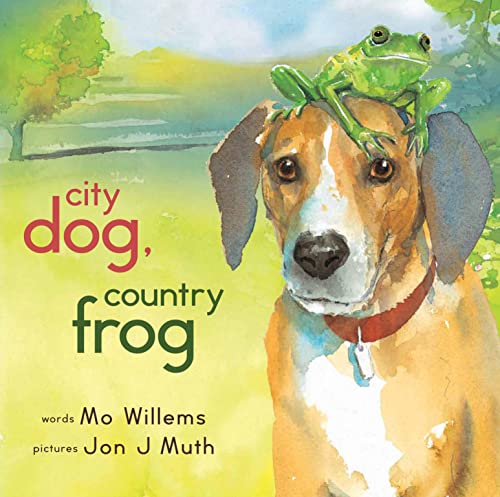 Muth (Zen Shorts) sets a limpid rural scene for Willems's (Naked Mole Rat Gets Dressed) two unlikely friends in this tranquil tale of change. One spring day, redolent with fresh yellow-greens and pale blues, City Dog tastes life "without a leash!" Exploring a reedy pond, he meets Country Frog, who teaches him "jumping and splashing and croaking." When summer arrives, City Dog demonstrates "sniffing and fetching and barking." Fall brings orange-gold foliage and a brown cast to Country Frog's emerald skin. In wintertime, City Dog trots through the snow to find Country Frog's favorite rock unoccupied. A closing chapter, "spring again," shows City Dog encountering another animal and repeating the same greeting Country Frog met him with the year before. Willems's concise sentences, paired with joking illustrations in his other works, lose their hilarity--but gain significant emotional weight--when matched with Muth's watercolors. Pink blossoms and red maple leaves allude to Japanese art; Muth pictures Country Frog as a wise tutor who tosses a stick for his apprentice and, in a rain shower, protectively holds a leaf over the dog. The understated episodes acknowledge the transitory nature of the seasons and of life itself. PW"

The book begins in spring. City Dog comes to the country, thrilled to run without a leash. Something stops him-Country Frog. Frog's waiting for a friend: "But you'll do." After that the duo plays together, and Frog teaches Dog about splashing and croaking. In the summer, City Dog returns and runs to see Frog. Now it's his turn to teach Frog games, replete with sniffing, fetching, and barking. In the fall, Country Frog is tired. "Maybe we can play remembering games." And that's what they do, remembering jumping and splashing, sniffing and barking. In the winter, snow is everywhere, but Frog is gone. When spring returns, a chipmunk comes across City Dog. "What are you doing?" she asks. City Dog replies sadly, "Waiting for a friend." Then he smiles a "froggy" smile and adds, "But you'll do." It's hard to imagine a picture book that more consistently (and touchingly) hits all the right notes. Willems, never one to overwrite, is gracefully spare here, making every word count. That leaves room for Muth's watercolors, richly seasonal, which fill each page. The pictures are imbued with hope and happiness, leaving and longing. This wonderful collaboration makes a significant impact with subtlety and wit. Adults and children will each take away something of their own. Booklist"

In Willems's latest, a departure from his urban sensibility as well as his first book as solely the author, a dog from the city explores new territory when he moves to the country and befriends a frog. The book follows the friends through the seasons. A picture book of this length could feel endless, but this glides along as the friends share country-frog and city-dog pastimes in spring and summer. Fall becomes a time for slowing down, and then in winter City Dog's friend disappears, an event foreshadowed in fall by a gentle image of the frog's "hand" resting on the sleeping dog. Just when readers may find themselves reaching for the tissues, a new friend shows up for the dog in this smart and subtle meditation on life, love and loss. The author provides the perfect amount of humor to keep things from getting too heavy, and Muth's astounding watercolors lend incredible depth, guiding readers easily from emotion to emotion as well as from season to season. The image of a happy dog treading water with a frog on his head says it all. Kirkus"

Spare, poignant, and ultimately upbeat, this tale depicts the natural cycle of friendship from an enthusiastic first encounter to contented companionship to the heartbreak of loss and eventual emotional renewal. Presented with a comfortingly consistent narrative structure, the events are set against the backdrop of the changing seasons, reassuring readers that winter will turn again to spring, sadness to joy. In "spring," City Dog runs free in the countryside for the first time ever and discovers an unfamiliar creature perched on a rock. Asked, "What are you doing?" Country Frog smiles and replies, "Waiting for a friend but you'll do." The two play Country Frog games ("jumping and splashing and croaking") and when reunited in "summer," they enjoy City Dog pastimes ("sniffing and fetching and barking"). In "fall," Country Frog is tired, so the friends spend their time remembering. When City Dog arrives again in "winter," Country Frog is nowhere to be found (a wordless spread shows the pooch sitting on the rock, looking small and forlorn against a stark winterscape). In "spring again," a sad-looking City Dog befriends another critter with a familiar line, and then beams "a froggy smile" (shown in close-up, this warmly illustrated grin guarantees that Country Frog will not be forgotten). Making expert use of color and texture, Muth's expressive paintings clearly convey the tale's emotional nuances. This understated picture book allows plenty of room for young readers to interpret the animals' feelings for themselves and perhaps discuss their own emotions. SLJ"

It's spring vacation for City Dog, and he joyfully heads across the country meadow, unleashed. Down by the water, he makes a new friend, and Country Frog teaches him some games-jumping, splashing, croaking. Come summer, City Dog returns and this time takes the lead-sniffing, fetching, barking. In the fall, Country Frog is tired, and the two are content to simply rest and reminisce on Frog's rock. Winter comes, and so does City Dog, but "Country Frog was not there." Spring comes again, and...let's just say that this is not a book about hibernation. The text of the rhythmic, almost circular story is brief and quietly declarative, few words stretching to even three syllables, and calmly centered in the middle of the white left-hand pages while Muth's watercolors fill the right. These are expansively glorious evocations of each season's rural splendors, with the homelier figures of our heroes providing an empathetic link to the landscape. The ending, in which City Dog finds a new friend, is bittersweet; a tough lesson gently put. Horn Book"

In spring, when City Dog runs free in the country for the first time, he spots Country Frog sitting on a rock, waiting for a friend. "You'll do," Frog says, and together they play Country Frog games. In summer, they meet again and play City Dog games. Through the seasons, whenever City Dog visits the country he runs straight for Country Frog's rock. In winter, things change for City Dog and Country Frog. Come spring, friendship blooms again, a little different this time.

Mo Willems' spare, poignant text and Jon J. Muth's expressive watercolors team up to tell a story that will resonate with readers of all ages.