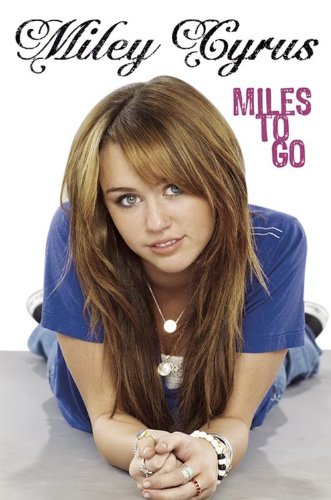 “There are multiple sides to all of us. Who we are and who we might be if we follow our dreams.”


Three years ago, Miley Cyrus was a virtual unknown. Her life in rural Tennessee was filled with family, friends, school, cheerleading, and the daily tasks of living on a farm. And then came a little show called Hannah Montana.
Almost overnight, Miley would rocket to superstardom, becoming a television and singing phenomenon. Quiet days were replaced with sold-out concerts, television appearances, and magazine shoots. But through it all, Miley has remained close to her family and friends and has stayed connected to the Southern roots that made her so strong.
In Miles to Go, Miley offers an honest, humorous, and often touching story of one girl's coming-of-age--from private moments with her pappy to off-roading with her dad, Billy Ray, to her run-ins with mean girls. Miley talks about suffering through drama and heartbreak and coming out the other end unscathed (relatively). And now for the first time, she will discuss it all?the milestones still left to reach (driver’s license! voting!), dreams to live out (travel to Asia! find true love!), and the lessons to be learned (remembernig to enjoy every moment!).
This is a truly unique look inside the world of one of today’s biggest and brightest stars as she tackles looking back and moving forward.

Miley Cyrus grew up on a farm in Franklin, Tennessee, before heading to Hollywood and superstardom playing Hannah Montan on the hit Disney Channel show. A triple threat, the sixteen year-old has acted, sung, and danced her way to numerous awards, including Favorite TV Actress and Best Performance in a TV Series at the Kids' Choice Awards as well as Favorite Artist at the Teen Choice Awards (to name only a few). Her first solo album, Breakout, debuted at number one on the Billboard charts and has since gone on to sell over a million copies. When not keeping busy with her work obligations, Cyrus is very involved with several charities. In 2008, the first-time author was chosen as one of Time magazine's World's 100 Most Influential People as well as The Hollywood Reporter's Women in Entertainment Power 100.