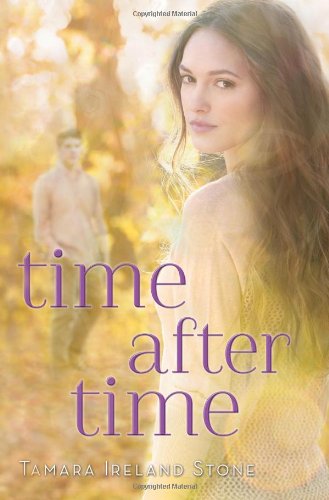 Gr 8 Up Readers familiar with Anna and Bennett's "long distance" relationship from Time Between Us (Disney-Hyperion, 2012) will enjoy following their story, this time through Bennett's eyes. Back in modern-day San Francisco, he tries to see Anna as often as possible in 1995 Evanston, IL, traveling across both space and time to do so. Things start to go wrong when Bennett loses control over his strange ability. After saving Anna's best friend from a car accident in the first book, he begins to change the past in order to avert other tragedies. He must grapple with the moral implications of his special gift and the increasingly intense headaches and bloody noses he experiences upon returning to his own time. Paying too much attention to the rules governing relativity and the space-time continuum may give readers headaches of their own, but the plot marches along at a good pace and those who like romance/adventure stories will want to find out if Anna and Bennett end up together. With the 50th anniversary of Dr. Who and movies like About Time (2013) at the box office, the time-travel theme gives this book plenty of pop-culture cachet. Gesse Stark-Smith, Multnomah County Library, Portland, OR SLJ"

Bennett mooches around his family's high-end San Francisco house in 2012, waiting for his girlfriend, Anna, to return to Evanston, Ill., from her summer in Mexico-in 1995. Bennett uses his amazing, inexplicable ability to travel through time to visit Anna in a series of trips that can't feel anything but futile. With 17 years between them, how can this romance survive? Anna's parents, ignorant of Bennett's abilities, become increasingly resentful of his seemingly cavalier treatment of their daughter. If he can't stick around, why doesn't he just leave her alone? And why does Anna put up with it? Meanwhile, in 2012, Bennett begins to use his talent the way his father always wanted him to: to correct senseless tragedies. Remarkably, he feels great after these interventions, not drained and afflicted by migraines the way he usually does after traveling back through time. Conversely, his returns from visits to Anna are becoming increasingly bloody and debilitating. Bennett serves as present-tense narrator of this sequel, describing his various agonies, physical and emotional, as he continues to pursue this hopeless relationship. Once again, Stone fails to provide readers with a solid understanding of Bennett's singular ability, seemingly changing the rules to suit her plot and characters-up to and including an apparently impossible resolution. There's romantic angst aplenty but little else to keep readers invested in either story or characters. (Fantasy. 12-16) Kirkus"

Calling Anna and Bennett's romance long distance is an understatement: she's from 1995 Chicago and he's a time traveler from 2012 San Francisco. The two of them never should have met, but they did. They fell in love, even though they knew they shouldn't. And they found a way to stay together, against all odds.
It's not a perfect arrangement, though, with Bennett unable to stay in the past for more than brief visits, skipping out on big chunks of his present in order to be with Anna in hers. They each are confident that they'll find a way to make things work...until Bennett witnesses a single event he never should have seen (and certainly never expected to). Will the decisions he makes from that point on cement a future he doesn't want?

Told from Bennett's point of view, Time After Time will satisfy readers looking for a fresh, exciting, and beautifully-written love story, both those who are eager to find out what's next for Time Between Us's Anna and Bennett and those discovering their story for the first time. Praise for TIME BETWEEN US "A beautifully written, unique love story." --Melissa Marr, New York Times best-selling author of The Wicked Lovely series "A warm, time-bending romance [that] will have readers rooting for the couple that keeps daring fate." --Publishers Weekly

"The story will hold readers with its twists and turns, present and future; its love, sadness, and anger; and especially, its surprising secrets." --Booklist "a compelling story of love, fate, and consequences with plenty of sigh-worthy moments, this novel is the perfect choice for readers who want a romance that leaves them with something to think about when it's over. --Bulletin of the Center for Children's Books "Romantic and passionate, Stone's debut novel is swoon-worthy...will resonate with readers who enjoy their romance mixed with adventure." -- School Library Journal
"Time Between Us is the very best kind of love story --heart-pounding, intense, and unputdownable!" -- Elizabeth Scott, author of Bloom and Perfect You