The Keynesian Revolution: Capitalism as a Flawed System, and Ideas for a New Order (Great Economic Thinkers) 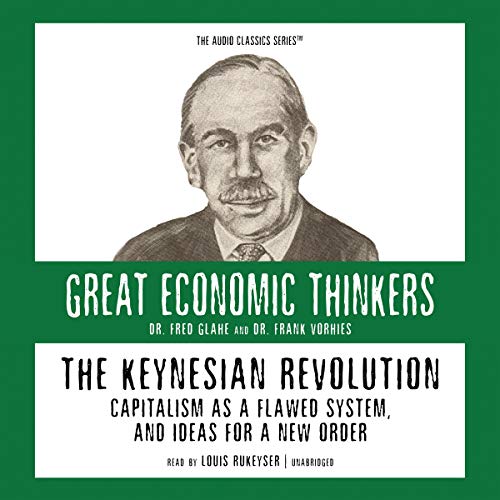 John Maynard Keynes (1883-1946) was without question the most influential economist of the twentieth century. His most important work, The General Theory of Employment, Interest, and Money, was published in 1936, and it was widely perceived as offering plausible explanations and solutions for the Great Depression. Keynes suggested that capitalism is vulnerable to instability caused by insufficient consumer demand. He emphasized the reluctance of workers to accept reductions in nominal wages, preventing free market adjustments to unemployment. Based on these and other perceived defects in the capitalist system, Keynes suggested government intervention in the economy, and modern politicians have accepted and applied Keynesian ideas with great enthusiasm. The Great Economic Thinkers Series is a collection of presentations that explain in understandable language the major ideas of history's most important economists. Special emphasis is placed on each thinker's attitude toward capitalism, revealing their influence in today's debate on economic progress and prosperity.

Louis Rukeyser (1933-2006), narrator of the Great Economic Thinkers and the Secrets of the Great Investors series, was recognized as America's most popular economic commentator. He was known and admired for his ability to discuss economics in a lively and insightful way.

Dr. Israel Kirzner is a leading economist in the Austrian school. Kirzner's major work is in the economics of knowledge and entrepreneurship and the ethics of markets. He is a leading authority on Ludwig von Mises' thinking and methodology in economics and received the Global Award for Entrepreneurship Research in 2006.

1. The Keynesian Revolution: Capitalism as a Flawed System, and Ideas for a New Order (Audio Classics)

Buchbeschreibung Audio CD. Zustand: Good. Item may show signs of shelf wear. Pages may include limited notes and highlighting. May include supplemental or companion materials if applicable. Access codes may or may not work. Connecting readers since 1972. Customer service is our top priority. Bestandsnummer des Verkäufers mon0001985642

2. The Keynesian Revolution: Capitalism as a Flawed System, and Ideas for a New Order (Audio Classics)

Buchbeschreibung Audio CD. Zustand: Good. Connecting readers with great books since 1972. Used books may not include companion materials, some shelf wear, may contain highlighting/notes, may not include cdrom or access codes. Customer service is our top priority!. Bestandsnummer des Verkäufers S_274207086

3. The Keynesian Revolution: Capitalism as a Flawed System, and Ideas for a New Order (Great Economic Thinkers)