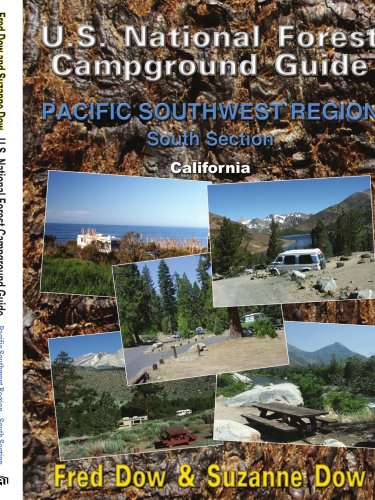 Leave behind the stress and crowds of a busy life and enter a place of towering beauty and magnificent vistas, of quiet and solitude, of challenges and rewards. And its all within a day or two drive from the dense population centers found in California, south of Sacramento. Challenging the sights in neighboring Kings Canyon and Sequoia National Parks is the towering and serene beauty of Inyo, Sierra and Sequoia National Forests. And while views found in Yosemite National Park are memorable, those found in Inyo and Stanislaus National Forests are magnificent and without the crowds. Visitors can experience the awesome quiet of a desert at sunrise when camping in the Cleveland National Forest or the calm of a Pacific Ocean beach sunset when visiting Los Padres National Forest. Although within a short drive of the Los Angeles basin, finding a place of solitude in the San Bernardino or Angeles National Forests isn't difficult. Visitors need only to put on their boots and go for a hike or launch their boat, kayak, or raft and spend a day on the water. The greatest challenge posed by national forests south of Sacramento is narrowing down the many and varied choices for recreating. But the rewards to accepting the challenge are many and great. Whether you camp in a tent or a recreational vehicle (RV), there are campgrounds in U.S. National Forests to satisfy the needs of most campers. The U.S. National Forest Campground Guide, Pacific Southwest Region (South Section), describes 238 developed campgrounds in 8 National Forests located in California, south of Sacramento. All of the campgrounds were personally visited and researched by the authors of this Guide. There are more than 50 items of information for each campground, narrative descriptions (including authors' anecdotes), maps displaying the relative location of the campgrounds, and quick look-up tables to help in the selection of a campground. In addition, there are sidebars throughout the Guide containing useful infor

The authors, Fred and Suzanne (Suzi) Dow, are a husband-wife team researching developed campgrounds located in National Forests throughout the United States. Starting in May 1996, the authors set off from Burke, VA in their 23-foot travel trailer and became full-time RVrs for almost three years. The authors now live in Bisbee, AZ for six months and are on the road the other six months a year visiting National Forests and researching campgrounds. As of September 14, 2007, the authors have visited 151 of the 155 National Forests and personally surveyed 2,345 campgrounds. They expect to complete their research during the year 2008. Suzi Dow, a former Army brat, spent a good bit of her youth traveling across the United States. Those early years of endless miles in the back of the family station-wagon were not enough. During the summer of 1976, she and her two children spent three months tent camping on a meander from coast to coast. This time produced some of her favorite memories. Just before starting work on this Guide, Suzi earned her Master's degree from George Mason University in Fairfax, VA. Now a resident of Bisbee, AZ, she enjoys her position as an Instructor at Cochise Community College, working on the latest edition of the Guides and getting acquainted with a stationary home, at least for six months of the year. Fred Dow was raised in Newton Center, MA and graduated from Western Kentucky University in Bowling Green, KY in January 1959. Following college, Fred spent over three years in the Army as a Military Police Officer stationed in Garmisch, Germany. After his discharge, Fred was employed by Aetna Life and Casualty as a claims representative in Richmond, VA and Washington, DC. Later, Fred was employed by two R&D firms as the Director of Administration and Personnel in McLean, VA and Rockville, MD. During the summer of 1972, Fred started work for the Department of Housing and Urban Development (HUD) in Washington, DC, first as a program analyst, then finally