Verwandte Artikel zu In the Heart of the Rockies: A Story of Adventure in...

G. A. Henty In the Heart of the Rockies: A Story of Adventure in Colorado (Classic Reprint)

In the Heart of the Rockies: A Story of Adventure in Colorado (Classic Reprint) 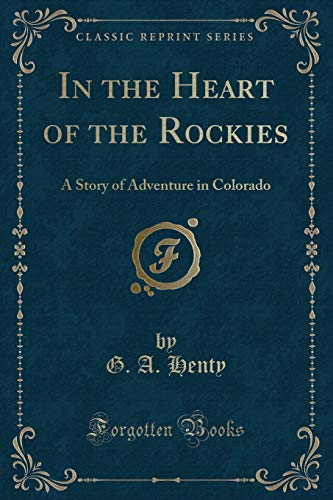 Excerpt from In the Heart of the Rockies: A Story of Adventure in Colorado

Paid several visits to the country in 1878 and the following years in quest of sport, and was the first white man to penetrate the recesses of the higher mountains. At that time the Indians had almost entirely deserted the country. For the details of the dangers and difficulties of the passage through the canons I am indebted to the official report of Major Powell, published by the United States govern.

This book is a reproduction of an important historical work. Forgotten Books uses state-of-the-art technology to digitally reconstruct the work, preserving the original format whilst repairing imperfections present in the aged copy. In rare cases, an imperfection in the original, such as a blemish or missing page, may be replicated in our edition. We do, however, repair the vast majority of imperfections successfully; any imperfections that remain are intentionally left to preserve the state of such historical works.

Annex PR Preface to the Original Edition Until comparatively lately that portion of the United States in which I have laid this story was wholly unexplored. The marvellous canons of the Colorado River extend through a country absolutely bare and waterless, and save the tales told by a few hunters or gold-seekers who, pressed by I ndians, made the descent of some of them, but little was known regarding this region. It was not until 1869 that a thorough exploration of the canons was made by a government expedition under the command of Major Powell. This expedition passed through the whole of the canons, from those high up on the Green River to the point where the Colorado issues out on to the plains. Four years were occupied by the party in making a detailed survey of the course of the main river and its tributaries. These explorations took place some eight or nine years after the date of my story. The country in which the Big Wind River has its source, and the mountain chains contained in it, were almost unknown until, after the completion of the railway to California, the United States government was forced to send an expedition into it to punish the Indians for their raids upon settlers in the plains. For details of the geography and scenery I have relied upon the narrative of Mr.
(Typographical errors above are due to OCR software and don't occur in the book.)

Forgotten Books is a publisher of historical writings, such as: Philosophy, Classics, Science, Religion, History, Folklore and Mythology.

Forgotten Books' Classic Reprint Series utilizes the latest technology to regenerate facsimiles of historically important writings. Careful attention has been made to accurately preserve the original format of each page whilst digitally enhancing the aged text. Read books online for free at www.forgottenbooks.org