Robinson, Mary Everybody Matters: A Memoir

Everybody Matters: A Memoir 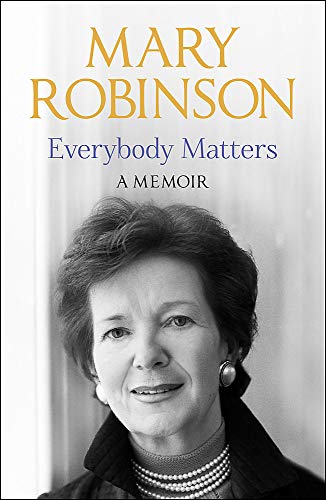 Engrossing memoir... an inspiring read. * The Good Book Guide * Everybody Matters has all the hallmarks of the woman herself. Concerned for the truth, unflinching in the telling of it and passionate to achieve a fairer world. I hope it inspires as many as possible. * Sir Richard Branson * A candid and understated account of her life. * Mail on Sunday (Eire) * 'As an advocate for the hungry and the hunted, the forgotten and the ignored, Mary Robinson has not only shone a light on human suffering, but illuminated a better future for our world.' * President Barack Obama * 'Like many English words, the word "bold" - brave to the British - acquired new depths across the Irish Channel. It gained a sense of rebellion and a twinkle of mischief. Mary Robinson is a bold woman. Whether taking on the oppressive orthodoxy of Catholic dogma embedded in the Constitution, the rights of women, the oppressed and the dispossessed, she has been bold, courageous, compassionate and fiercely determined to do what is right. Even when she was a young girl playing the part of Batman, she took on the entire forces of evil and has been a fearless champion of those in need ever since. This is an extraordinary story of an extraordinary woman, who is also one of my heroes.' * Peter Gabriel * 'Mary Robinson has all the Gaelic attributes; she is warm, friendly and engaging. She is really passionate about human rights, especially the rights of women and young girls, and cares deeply about the environment. This is her story, the story of the lawyer who rose to be Ireland's first woman President and the UN High Commissioner for Human Rights.' * Archbishop Emeritus Desmond Tutu * 'Mary "rights-based" Robinson has been right about a lot of things... human wrongs and human rights... not just in theory but in practice and in action, whether for Ireland as President, for the UN as Rights Commissioner, at GAVI as Chair, or at the Elders. We need more Marys. Hail Mary.' * Bono *

Shortlisted for the Political Book Awards 2013 Political Book of the Year One of the most inspiring women of our age, Mary Robinson has spent her life in pursuit of a fairer world. Now, for the first time, she reveals what lies behind the vision, strength and determination that has helped her to achieve so much for human rights around the globe. She describes the upbringing which gave her her strong sense of values and how, as her personal convictions grew, she came into painful conflict with her parents - marrying against their wishes and, later, helping to legalise contraception in a deeply Catholic Ireland. As a barrister she followed her conscience to win landmark cases advancing the causes of women and the marginalised against the prejudices of the day. And when - to the surprise of many - she became the first woman President of Ireland in 1990, she reinvigorated the role and helped put Ireland firmly on the international stage. Accepting the position of UN High Commissioner for Human Rights in 1997 was to prove an enormous challenge and here she does not shrink from describing the huge political difficulties she encountered among the many triumphs during her term. Subsequently, based in New York, she led Realizing Rights for eight years, pioneering how to implement in practice economic and social rights: working in African countries on health, decent work, corporate responsibility and women's empowerment in peace and security. Now heading her own Climate Justice foundation she has put together a team to work effectively on behalf of the millions of poor around the world most affected by climate change. Told with the same calm conviction and modest pride that has guided her life, Everybody Matters will inspire everyone who reads it with the belief that each of us can, in our own way, help to change the world for the better.

Everybody Matters: A Memoir