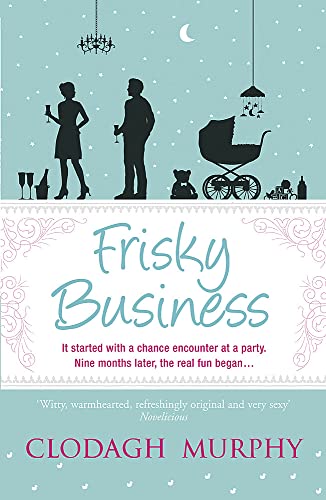 'A heart-warming romantic comedy ... Girl in a Spin is hilarious!' * Beauty and Lace * 'I was immediately immersed in the plot, laughed out loud frequently and grew so fond of the characters that I desperately wanted to know how this delightful story would end ... Clodagh Murphy is a talented new writer ... I can't wait to read more from her' (Girl in a Spin) * Novel Escapes * 'Girl in a Spin ... is out of the park good ... I was hooked until the very last page, and Girl in a Spin will definitely be making it on my Favourites List' * Chick Lit Plus * 'Clodagh Murphy ... makes you care about her characters ... I just couldn't put it down and I was desperate (desperate I tell you!) to find out how it was all going to end ... Clodagh is a hugely talented new writer' (Girl in a Spin) * Chick Lit Reviews and News * 'A thorough enjoyable read that more than matched up to its predecessor, and has me waiting for a third instalment from Clodagh Murphy. I'm giving this a 10/10!' (Girl in a Spin) * Novelicious * 'Clodagh Murphy has a gift for creating leading characters that you can't help but love' (Girl in a Spin) * Chicklit Club * 'Funny, sexy, gripping and very satisfying' (The Disengagement Ring) * Keris Stainton, Five Minutes Peace * 'The Disengagement Ring is a hugely enjoyable novel and Clodagh Murphy is a very promising writer' * Chick Lit Reviews and News * 'If you enjoyed reading about Marian Keyes' Walsh family, then here's another madcap but endearing Irish family for you to fall in love with' (The Disengagement Ring) * Chicklit Club * 'Fast-paced escapism which does what it promises - transports readers out of their daily lives' * Woman's Way * 'Moves along at lightning pace... it entertained me right to the last page' * Evening Echo * 'Humour crackling on every page ... fans of Marian Keyes and Sophie Kinsella will love Girl in a Spin with its funny twists and turns ... As with her first novel, The Disengagement Ring, Murphy has turned a good idea into a great read' * Irish Independent * 'An entertaining tale of intrigue, romance and family ties set between Dublin, West Cork and Italy. Perfect escapism for the Heat-reading generation' (The Disengagement Ring) * Irish Independent * 'Pop it in your suitcase, or curl up on the couch with it on a lazy Saturday afternoon' * RTE Guide * Praise for Clodagh Murphy * : * 'Clodagh Murphy is an exceptionally talented (and hilarious) Irish writer whose latest book will make the perfect beach read. Star Wars references, single motherhood and plenty of sizzling sex all feature, with a nice dollop of suspense thrown in for good measure.' * Irish Independent Mothers & Babies supplement * 'Witty, warmhearted, refreshingly original and very sexy. Can't wait for the next one' * Novelicious * 'A gripping story with a pacy plot, plenty of quirky characters.' * Irish Independent *

A steamy encounter with a stranger at a fancy dress party seemed like a fun idea. But Romy had no idea how complicated her life was going to get... From the author of Some Girls Do, Frisky Business is sharp, sexy and full of heart. In the past year, Romy Fitzgerald has learned three valuable lessons. One: Never have sex at a party with a stranger dressed as Darth Vader. Two: Don't tell him things you've never told anyone else. Three: If you do, at least find out the stranger's name because you never know when you might need it ... Like nine months later when the baby arrives. While Romy is happy to raise Luke on her own, one day he'll need to know the truth about his father and Darth deserves to know he has a son. There's only one problem. Luke's father knows things about Romy's past she'd rather kept hidden - and finding him means she'll have to face the memories she's been running from. Romy's about to discover that when it comes to love and real life, secrets rarely stay hidden. But will she find her dark knight, or will she be left to raise Luke solo?