Verwandte Artikel zu Peggy and Me

Hart, Miranda Peggy and Me 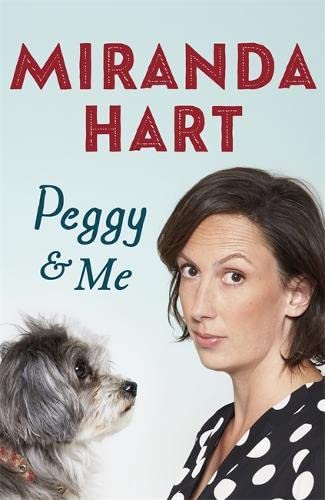 'Hilariously funny and often moving memoir ... we loved every word *****' Heat 'Open, honest ... her misadventures are hilariously described...charming and funny' Daily Express The hilarious and heartwarming memoir of Miranda and her life changing dog, the inimitable and most lovable Peggy. Hello dear book browser and welcome to Peggy and Me, the story of my life since getting a beautiful Shih-Tzu Bichon Frise cross puppy (I call the breed a Shitty Frise - fun) in the form of Peggy. Some of you may be thinking: "a book about a dog, how totally brilliant, I need hear no more, I'm sold." In which case we should be best friends and go out to tea together, every day. Others of you may be thinking: "a book about a dog, how totally mad, she must have officially lost it." In which case I completely understand. For I once viewed dog owners with much suspicion. The way they obsessively talk about their dogs often using voices for them to reply; the way they have a light covering of dog hair all over their clothes and sofas; and worse, an alarming comfort and ease around excrement. But I now get why people become so mad about their hounds. It wasn't instant love I have to admit. Getting a puppy when I was at a low ebb in my life wasn't easy - there was a lot of challenging, what I call, dog administration (dog-min), and the humiliating first trip to the vet still haunts me. It's been a bumpy old road, but Peggy has been lovingly by my side through some life changing moments and I wouldn't have coped without her. Most surprisingly she has taught me a huge amount - not how to get an old pie packet out of a bin and lick it (I could already do that), but real lessons about life and love and trust and friendship. Put aside any doggy reservations and come walkies with Peggy and me ...

MIRANDA Miranda Hart is a writer, comedian and actress. Her first book Is It Just Me? was a Sunday Times number one bestseller and has sold over 700,000 copies. She was the first female comedian to do an arena stand-up tour with her My What I Call Live Show. She was BAFTA nominated for her much loved role Chummy in BBC 1's hit drama Call the Midwife. And has won numerous awards for her role in her self-penned hit sitcom Miranda, including Queen of Comedy at the Comedy Awards. This is a role she thinks should be officially appointed by the Queen and means you get to have afternoon tea at the palace regularly and go out once a week with Prince Harry. PEGGY Peggy is the best dog that ever lived. She is well known for her cute little smiley face, puppy dog eyes, extremely soft strokeable fur, and jaunty little gait. Her biggest achievements include stealing a squishy ball off a toddler, nicking a Scotch egg from a families picnic, and doing a poo in front of a paparazzi so Miranda was photographed poop a scooping like a fool.