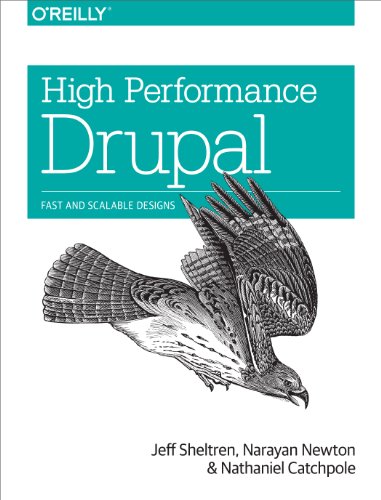 How can you help your Drupal website continue to perform at the highest level as it grows to meet demand? This comprehensive guide provides best practices, examples, and in-depth explanations for solving several performance and scalability issues. You’ll learn how to apply coding and infrastructure techniques to Drupal internals, application performance, databases, web servers, and performance analysis.

Covering Drupal versions 7 and 8, this book is the ideal reference for everything from site deployment to implementing specific technologies such as Varnish, memcache, or Solr. If you have a basic understanding of Drupal and the Linux-Apache-MySQL-PHP (LAMP) stack, you’re ready to get started.

Jeff has been involved with open source for over eleven years. He started using Linux professionally at the University of California at Santa Barbara, where he was a Senior Systems Administrator and Programmer for the Computer Science department. He most recently worked at the Oregon State University Open Source Lab (OSL) as the Operations Manager, providing technical and organizational leadership to the OSL while working closely with the many open source projects hosted there, including Drupal.org, the Linux Foundation, and the Apache Software Foundation.
Jeff has extensive infrastructure experience, gained over the years. As the Operations Manager at OSU Open Source Lab -- the largest open source hosting infrastructure of its kind -- he led the infrastructure and development teams; he is deeply involved in the CentOS Linux build and release process as a member of the QA team; and he works as a volunteer for the drupal.org infrastructure team. Jeff currently maintains a number of packages for the Fedora Project and Fedora's Extra Packages for Enterprise Linux (EPEL), and serves as the Lead Systems Engineer for multiple Tag1 clients. He lives in Vancouver, Washington.

Narayan is a co-owner of Tag1 Consulting, who joined the team in 2008. He was introduced to Drupal during his tenure at the Oregon State University Open Source Lab where he was the co-lead system administrator -- and served as their Database Administrator of over 180 MySQL databases -- the Freenode Server Administrator, and the Drupal.org Server Administrator. He is a permanent member of the Drupal Association, as their Systems Coordinator, and is the lead Systems Administrator for the Drupal.org Infrastructure Team. He is also a co-maintainer of the Pressflow high performance Drupal distribution.
Outside of Drupal, Narayan has been deeply involved in the FreeBSD, Gentoo, and Slackware communities. More recently, he acted as infrastructure lead for the Examiner.com 2.0 re-launch, infrastructure lead for the drupal.org redesign launch, and infrastructure lead/performance lead for drupal.org git migration. Narayan is currently Chief Technology Officer at Tag1 Consulting and resides in Portland, Oregon.

Nathaniel Catchpole has been using Drupal since version 4.5, and has been a regular contributor to Drupal core since 2006; along with extensive code profiling, he has contributed over 400 patches to the Drupal 7 release. Nathaniel also maintains the core entity, cache and taxonomy subsystems, as well as the memcache and entity cache contributed projects. In September 2011, Nathaniel became branch maintainer and release manager for the Drupal 8 release cycle.
Nathaniel has been with Tag1 Consulting since September 2010. Prior to that, he worked on the Examiner.com Drupal migration and launch, and as a consultant for CivicActions, with clients such as Sony BMG and Amnesty International.