Erwin, Will Sapling in the Brambles

Sapling in the Brambles 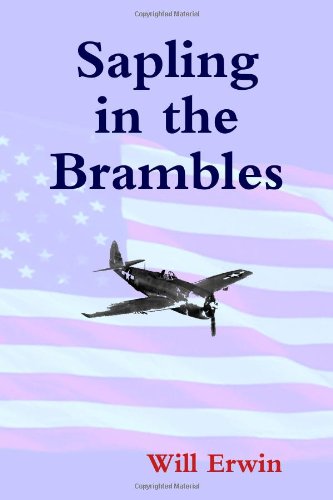 This is a family-friendly novel from Unlimited Publishing LLC, rich in historical detail and engaging characters, like books by James Michener. Unable to compete in sports, tone deaf, and behind in school as a child, shy Joe Oberlin's social awkwardness also stems from burn scars. As the Depression deepens, he learns he has a gift for unconventional farming and a family that believes in him. Then he learns to fly. A World War II fighter pilot, he sticks to his old-fashioned country values, which clash with those of an urban superior who persecutes him. Supported by his flamboyant friend Crole, in the skies he faces fear and death; on the ground he meets a brilliant British woman to whom his "unconventional conventionality" matters.

Raised on a farm in rural Indiana, William W. Erwin was a 20 year-old member of the Army Air Corps in WW2. He bought his first 80 acres with money earned from 4H projects. With a degree in agricultural economics from the University of Illinois, he also fed a passion for history through continuing education classes... and by keeping his latest history read under his bed every night. A life-long farmer and public servant, he served as a state senator, Assistant Secretary of Agriculture, EPA environmental expert, and noted public speaker. A world traveler, he told countless stories to his grandchildren on the backroads of Europe. His gift for storytelling is now available to all in a charming trio of historical fiction books, suitable for children and adults alike. Visit ErwinBooks.com for more information.

1. Sapling in the Brambles

Buchbeschreibung Paperback. Zustand: Good. Connecting readers with great books since 1972. Used books may not include companion materials, some shelf wear, may contain highlighting/notes, may not include cdrom or access codes. Customer service is our top priority!. Bestandsnummer des Verkäufers S_309749502

2. Sapling in the Brambles

3. Sapling in the Brambles

Buchbeschreibung Paperback. Zustand: Very Good. Item is in very good condition. If supplemental codes/CDs for textbooks are required please contact us prior to purchasing as they may be missing. Photos are stock pictures and not of the actual item. Bestandsnummer des Verkäufers DS-1451585462-2