Verwandte Artikel zu What Doesn't Kill Us Makes Us Bitter

Lorre, Chuck What Doesn't Kill Us Makes Us Bitter

What Doesn't Kill Us Makes Us Bitter 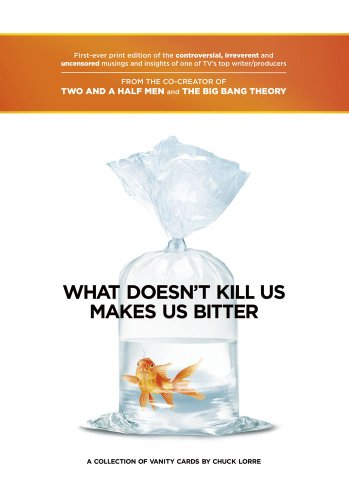 TV’s most successful comedy producer Chuck Lorre delivers a hilarious collection of vanity cards in print for the first time.

Since 1997, fans of some of the most popular sitcoms ever broadcast — The Big Bang Theory,Two and a Half Men, Mike & Molly and Dharma & Greg — have been granted a fleeting glimpse each week into the unfettered and uncompromising mind of the incredibly prolific creative force behind those series, Chuck Lorre. That's because Lorre devotes exactly one second of airtime per show to expressing his deepest thoughts at the end of the credits on his now-infamous vanity cards, which for many years could only be enjoyed by freeze-framing on a VCR and squinting to read the tiny, wobbling words.

Now, for the first time ever, hundreds of Lorre's witty and insightful musings have been gathered together in alimited-edition, slipcase book from Chuck Lorre himself that reveals a hilarious, thought-provoking and scandalous body of work unlike any other creative endeavor. Veering from philosophical treatises to personal revelations to the occasional furious diatribe, Lorre never shies away from controversy — even in the face of network censorship, as has often happened.

But never fear: Every word on the original vanity cards included in this curated selection is here — even the censored texts that never made it to air. Enhanced with sly, ingenious illustrations and designs that capture the off-kilter essence of Lorre's bite-sized dispatches, What Doesn't Kill Us Makes Us Bitter will change the way you think about life, the universe and TV — or at least it'll save your eyesight.

One of the most accomplished television comedy writer/producers of the past 20 years, five-time Emmy® nominee Chuck Lorre co-created and serves as executive producer of the two most-watched comedies on television inThe Big Bang Theory and Two and a Half Men and is also executive producer of the hit sitcomMike & Molly. Previously, Lorre created hits such as Dharma & Greg, Grace Under Fire andCybill, and served as co-executive producer on Roseanne. In addition to writing scripts, Lorre is known for unabashedly expressing his opinions in the split-second vanity cards appearing at the end of each series episode.

2. What Doesn't Kill Us Makes Us Bitter