Verwandte Artikel zu All In: How the Best Managers Create a Culture of Belief...

Gostick, Adrian; Chester, Elton All In: How the Best Managers Create a Culture of Belief and Drive Big Results

All In: How the Best Managers Create a Culture of Belief and Drive Big Results 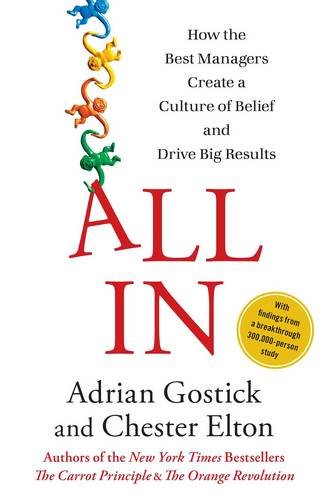 The authors of the bestsellers The Carrot Principle and The Orange Revolution present groundbreaking new findings: In the highest-performing teams and companies, managers create a "culture of belief," following seven essential steps of leadership. To have any hope of succeeding as a manager, you need to get your people all in. Whether you manage the smallest of teams or a multi-continent organization, you are the owner of a work culture-congratulations-and few things will have a bigger impact on your performance than getting your people to buy into your ideas and your cause and to believe what they do matters. Bestselling authors of The Carrot Principle and The Orange Revolution, Adrian Gostick and Chester Elton return to answer the most overlooked leadership questions of our day: Why are some managers able to get their employees to commit wholeheartedly to their culture and give that extra push that leads to outstanding results? And how can managers at any level build and sustain a profitable, vibrant work-group culture of their own? These leading workplace experts teamed up with research giant Towers Watson to analyze an unprecedented 300,000-person study, and they made a groundbreaking finding: managers of the highest-performing work groups create a "culture of belief." In these distinctive workplaces, people believe in their leaders and in the company's vision, values, and goals. Employees are not only engaged but also enabled and energized (termed the three Es), which leads to astonishing results-average annual revenues three times higher than for organizations lacking such a positive culture. And this was true during a period that included this most recent recession. Based on their extensive consulting experience and in-depth interviews with leaders and employees at exceptional companies such as American Express, Cigna, Avis Budget, Pepsi Bottling, and Hard Rock, the authors present a simple seven-step road map for creating a culture of belief: define a burning platform; create a customer focus; develop agility; share everything; partner with your talent; root for each other; and establish clear accountability. Delving into specific how-tos for each step, they share eye-opening stories of exceptional leaders in action, vividly depicting just how these powerful methods can be implemented by any manager. All In draws on cutting-edge psychology and all of the creative genius that have made Gostick and Elton a must-read for leaders worldwide. This vital resource will empower managers everywhere to inspire a new level of commitment and performance.

Adrian Gostick is the New York Times bestselling coauthor of The Carrot Principle and The Orange Revolution, which are sold in more than 50 countries around the world. He is a founder of the global training and consulting firm The Culture Works, with a focus in Recognition, Teamwork, and Culture. Learn more at TheCultureWorks.com or AdrianGostick.com Chester Elton is co-author of the best-selling "Managing with Carrots," nominated as the SHRM Book of the Year. He is also co-author of "The 24-Carrot Manager" and "A Carrot a Day." As a motivation expert, Chester has been interviewed by the Wall Street Journal, The New York Times, The Washington Post, Fast Company and has been a guest on CNN, Bloomberg Television and on National Public Radio. A sought-after speaker and recognition consultant, Chester is vice president of performance recognition with the O.C. Tanner Recognition Company. He has been a featured speaker at the Society for Human Resource Management annual conference, HR Southwest, Incentive Magazine Forums, New York City Premium and Incentive Show, and Chicago Motivation Show. He serves as a recognition consultant to Fortune 100 firms such as Johnson & Johnson, AOL/Time Warner, Avis and KPMG