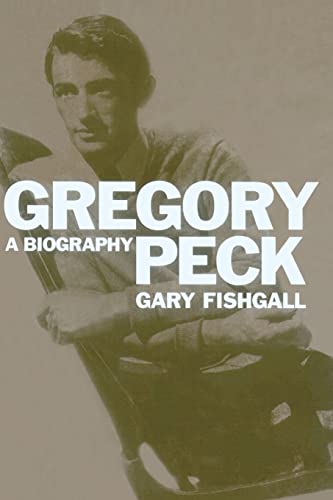 Gregory Peck's acting career has spanned six decades, during which the ruggedly handsome actor has played everything from a jaunty reporter to an angry Western gunfighter, an honorable lawyer to an obsessed sea captain, a priest to a World War II bomber pilot. To every role, he has lent a depth and intelligence that have made him a permanent American icon. In Gregory Peck: A Biography, Gary Fishgall meticulously recounts Peck's influential life, revealing the effects of the actor on the film industry and of the film industry on the actor. Although he planned on being a doctor, Peck was lured to the stage as a young man, leaving his native California for an uncertain existence as an actor in New York. After two years of study at the Neighborhood Playhouse in Manhattan, he made a successful Broadway debut in 1942, eventually returning to Hollywood to begin his new, high-profile life. His stunning movie career has included starring roles in such classics as Roman Holiday, Gentleman's Agreement, Cape Fear, Captain Horatio Hornblower, The Man in the Gray Flannel Suit, The Yearling, and Moby-Dick. After many Academy Award nominations, Peck won an Oscar in 1962 for his moving portrayal of Atticus Finch in To Kill a Mockingbird, his most celebrated film. Despite his very public career, Peck remains an extremely private man. In this comprehensive biography, the first written with the actor's cooperation and drawn from extensive research as well as dozens of interviews with Peck's friends and associates, Gary Fishgall portrays him in his many guises: the lonely young son of divorced parents; the stalwart military cadet; the aspiring college thespian; the hot Hollywood newcomer pursued by Goldwyn, Zanuck, Mayer, and Selznick; and the handsome movie star charming the likes of Ingrid Bergman, Jennifer Jones, and Ava Gardner. Fishgall reveals the truth about Peck's unhappy first marriage, his struggle to keep his family toget

Gary Fishgall has been an actor, director, drama critic, and reporter. He is the author of biographies of Jimmy Stewart and Burt Lancaster. He lives in St. Louis.