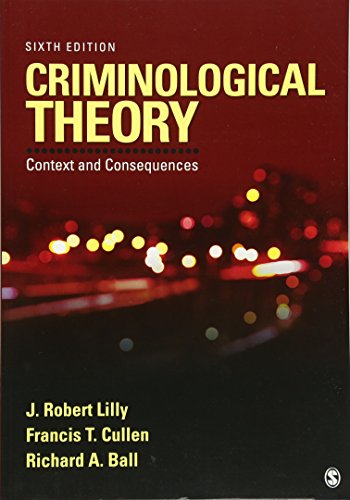 "I have long regarded this book as the most comprehensive and resolutely up-to-date theory text on the market. The authors always make the effort to stay up to date and incorporate the latest ideas, and students find their trawl through 20th century criminological theory the most accessible and informative. In each chapter there is a good balance of discussion and standard critiques, which students find useful for their essays and dissertations." (Steve Hall)

"The overall organization of the book is very good – this follows a logical pattern of development in relation to not only the historical development of theory, but also the process through which subsequent theories have built on previous frameworks. As a result, it is quite clear how theories and blocks of theory ‘fit together’." (Tony Murphy)

"Lilly et al is used on the modules as a recommended text. The text was chosen as it covers major theories in a clear and accessible manner to undergraduates. The strength of the book is it gives adequate consideration to the major theories we wish to cover in the modules many other theory books skip adequate consideration of scientific theory (ie chapter 2)." (Ruth Penfold- Mounce)

"Indeed, a major strength of the Lilly et al. text is that it provides a succinct explanation of the theories that is easily understood by students." (Jennifer Wareham)

"The depth of coverage, the accessible writing style, and the infusion of personal context material were all leading factors motivating my decision to use the Lilly text." (James Barnes)

"I do use Lilly, Criminological Theory for CRIM 4321 because it provides a comprehensive collections of major criminological theories that are presented in a straight forward manner in a text that is “student friendly.”  By this I mean that the information is both challenging but also in a format that is easy to read and comprehend." (Michael S. Proctor)

"I assigned Lilly, Cullen, and Ball in this course. Being a 5th edition title, it is a culmination of the hard work and dedication of the authors to continue to update a well crafted text.  The benefits of this book is that it explains the social and political events which led to the development and popularity of each theory. This allows students to grasp the somewhat discordant assumptions criminologists made over the years and better understand the casual order of each theory. The authors have done a masterful job of framing years of accumulated criminological theory into an approachable format." (Richard Lemke)

"In terms of readability, the 5th edition of Lilly is superior to Vold and superior in terms of coverage as well.  Also, I really like the contextual information provided with each theory as well as the implications of each theory, this is much better than Vold." (George Eichenberg)

"The strength of the Lilly text (compared to Siegel’s) is that it puts events and theories in historical perspective and connects them with the individual lives of the key theorists and the larger sociopolitical context. I also like that the Lilly text assesses the empirical validity of each currently relevant theory and links theories with policies based on these." (Maria Tcherni)

The sixth edition of Criminological Theory: Context and Consequences builds on its prior success with updated coverage of criminological theory and a fresh look at policy implications.


The new edition continues to offer a rich introduction to how scholars analyze crime in a clear, accessible text which moves readers beyond commonsense knowledge of crime to a deeper understanding of the importance of theory in shaping crime control policies. This thoroughly revised edition covers traditional and contemporary theory within a larger sociological and historical context.

New to This Edition: