Verwandte Artikel zu All I Need to Know About Filmmaking I Learned from...

Kaufman, Lloyd; Gunn, James All I Need to Know About Filmmaking I Learned from the Toxic Avenger 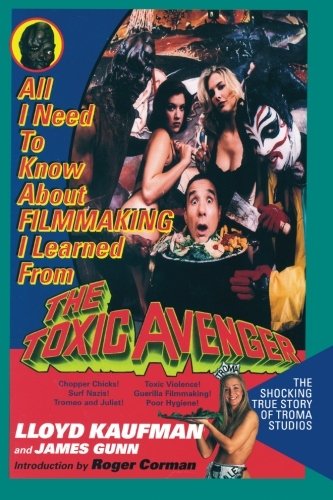 This is the true story of the moviemaking maverick who co-founded an independent studio almost Forty years ago in a humble broom closet... who used raw hamburger, Karo syrup blood, and Bromo-Seltzer vomit to create films of questionable artistic and moral value... who battled the MPAA rating board to bring his outrageous vision to the screen... who rejected Madonna after an audition... who defied the Hollywood system and slapped the face of the industry... and who built a B-movie empire filled with Hard-Bodied Lesbians, Surf Nazis, Kabuki Cops, Nymphoid Barbarians, and a lone hero known as The Toxic Avenger.This is the story of Troma Studios. A story of guerilla filmmaking at its cheapest, of the American Dream torn limb from limb, and of topless starlets menaced by obscene rubber puppets.

In the late 1960's, Kaufman was enrolled at Yale University (where he would later teach multiple Filmmaking Master Classes), diligently working on a respectable degree in Chinese Studies. However, Kaufman was destined for other things. As he explains in his hit book All I Need To Know About Filmmaking I Learned From The Toxic Avenger (published by Penguin Putnam), "At Yale I was placed in a dormitory room with two film fanatics, and I knew everything had irrevocably changed." In fact, Kaufman was infected with a love of movies from which he never recovered. In 1971, Kaufman met his future partner Michael Herz at Yale. The Troma Universe was born in 1974 with a series of highly original, sexy comedies such as Squeeze Play!, Waitress!, and other titles ending with an exclamation point. These movies, independent precursors to such later smash hits as National Lampoon's Animal House and Porky's, did well financially, although Kaufman continued to work on such outside productions as Rocky and Saturday Night Fever. Kaufman's relationship with mainstream Hollywood would not last long. "There were problems," Kaufman said, "as I always wanted to do things my own way and my employers insisted I do things the correct way." Kaufman proved his former employers wrong with his 1984 breakthrough movie, The Toxic Avenger. This tale of a health club mop boy named Melvin who is transformed into a hideously deformed creature of superhuman size and strength struck a chord with audiences and critics alike, demonstrating that there was a large number of people who were interested in seeing things done Kaufman's way. The Toxic Avenger led to an animated television series, "Toxic Crusaders," several different comic book titles (published by Marvel and, most recently, Troma's own independent comic book imprint), and four sequels. His most recent film is POULTRYGEIST: Night Of The Chicken Dead!

1. All I Need To Know About FILMMAKING I Learned From THE TOXIC AVENGER: The Shocking True Story of Troma Studios

2. All I need to know about filmmaking: I learned from the toxic avenger

3. All I Need To Know About FILMMAKING I Learned From THE TOXIC AVENGER: The Shocking True Story of Troma Studios

4. All I Need To Know About FILMMAKING I Learned From THE TOXIC AVENGER: The Shocking True Story of Troma Studios (Volume 1)

5. All I Need To Know About FILMMAKING I Learned From THE TOXIC AVENGER: The Shocking True Story of Troma Studios [Paperback] Kaufman, Lloyd; Gunn, James and Corman, Roger