Raise the Flag: Lean Thy Arms 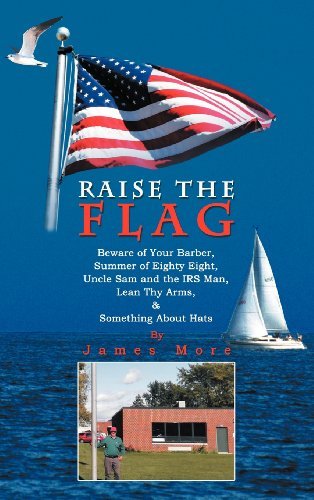 Homeless vagrant with college education publishes book for success story! “Artistic, inspirational, and educational,” echos Homeless Spartacus from under the bridge. "Magnificent photos with color and contrast." Barbara Jean, who attends barber college so she knows how to cut hair, she says, "When I read 'Something About Hats' I laughed so hard I peed my pants." Raise the Flag is not The Catcher in the Rye or Harry Potter―no wizards, witches, or flying broomsticks; just teachers, principals, professors, mentors, and barbers, but Raise the Flag is about searching for identity, purpose, and a career, and how flattering it is for the author when a young student does their book report after reading Raise the Flag. This one, you will like to look at the covers, front and back, and better yet, read for yourself about the progression of writing and value of education in the life of the author. It is said, never judge a book by the cover nor a person by their color, by the length of their hair, or by the clothes they wear, so chill out with this literary six-pack and enjoy reading the stories in Raise the Flag. The author, James More, by using the tools that an education provides produces six stories under one cover for Raise the Flag, while camping in a tent and fighting the home fought battles for life, liberty, and happiness. Raise the Flag is a collection of six stories about the progression of writing and value of education in the life of the author, who graduates from grade school, bounces through high school at several locations, graduates with honor, attends trade school, before doing a difficult, dangerous, demanding occupation of electrical lineman, suffers an agonizing injury forcing him to leave the security of his job, so he embarks on a search for a career, begins fulltime college classes, earns his degree, practices writing beyond college, completes a home study course, so forty years later he publishes Raise the Flag.

The six stories under one cover in Raise the Flag cost this author more for the first ten copies than the entire volume of Shakespeare with all of his sonnets and plays, while James More earns a degree at Northern Michigan. Humor is said to be a universal medicine, and Raise the Flag are for those who seek quality. Raise the Flag introduces this author making his debut. James More has brought this book to publication, while being homeless, camping in a tent, and riding a bicycle every day, all year. Upcoming, James More has written a chapter book to be read for children under the title of Home of the Mountain Goats for which he is looking for an illustrator and a publisher. He is working on a longer story soon to be released under the title of Smoke Sausages before tackling a most difficult memoir.